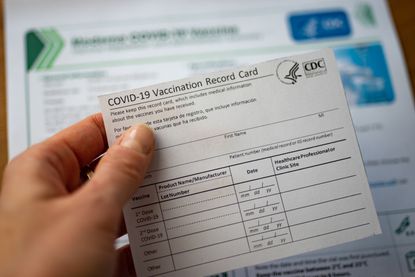 The latest risk regarding the COVID health crisis has emerged on the darknet.

The World Health Organization recently issued a warning about a widespread effort to forge and sell vaccination certificates, which purport its carrier is inoculated and effectively protected against coronavirus. Fake and stolen vaccines are also being pushed alongside negative test results for COVID-19 by way of the dark web, researchers said.

According to Check Point Research (CPR), an IT security firm, advertisements for such vaccines have increased by 300% over the course of the last three months. They are reportedly being marketed as shots developed by actual pharmaceutical and drug-making companies — including Johnson & Johnson, AstraZeneca, Sputnik and SinoPharm — whether they are actually developed by the brands or not.

“It’s clear to us that the target audience for darknet vaccine vendors are actually dealers, not necessarily the public at large,” Ekram Ahmed, spokesperson at Check Point, told Fox News on Sunday

The darknet is a hidden collection of internet sites only accessible by way of a specialized web browser and is typically rife with criminal activity.

Researchers have been tracking forums and marketplaces since January, when the misleading advertisements first started cropping up online.

The Oxford-AstraZeneca jabs are reportedly being sold at $500 apiece, while Johnson & Johnson and Sputnik are each listed at $600.

The Sinopharm shot is also reportedly available on the dark web for about $750.

When Check Point Research attempted to purchase a shot, the seller first requested they use an end-to-end encrypted service. Upon further questioning, the seller assured researchers that the vaccine would be sent in a temperature-regulated container.

From there, the vendor asked payment via Bitcoin.

“We paid them. They gave us a FedEx tracking number,” Ahmed told Fox. “The transaction was made last week and we have yet to get the vaccine we ordered.”