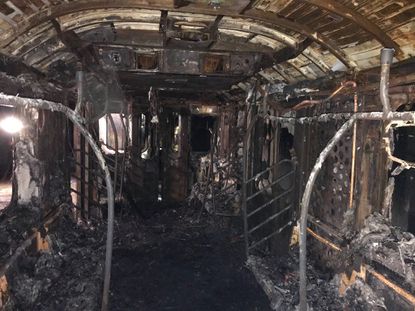 An ex-con long considered a suspect in a March fire that led to a heroic MTA train operator’s death was charged with murder Friday, police said.

Suspect Nathaniel Avinger, 50, quickly became a person of interest after he was busted for starting a fire two weeks earlier outside a Columbia University dorm.

But he was never charged with the deadly March 27 blaze that took No. 2 train operator Garrett Goble’s life.

Goble, 36, rushed commuters out of the train as flames spread from a shopping cart on the tracks of the 110th St./Central Park North station.

He got lost in the smoke-filled tunnel and collapsed, possibly from a heart attack, sources said.

Avinger’s arraignment was pending in Manhattan Criminal Court on Friday.

Sources said he was just released from a mental institution and got on cops’ radar after he was busted Wednesday for groping a woman train conductor in Brooklyn.

He made statements that linked him to the deadly March arson during questioning, police said.

A woman who identified herself as Avinger’s relative told the Daily News in March that he jumped from shelter to shelter and had a brother in Houston.

“The New York City Transit Authority has grieved and mourned Garrett Goble every single day for the last 9 months. Nothing will bring Garrett back to NYCT or to his sweet family,” NYCT Interim President Sarah Feinberg said in a statement Friday.

“There should be no tolerance for any form of violence in our transit system. Fires, sexual assaults, assaults on our workers – these are crimes committed against the very best of New York – the brave men and women who show up and serve this city each day and keep us all moving forward,” Feinberg said.