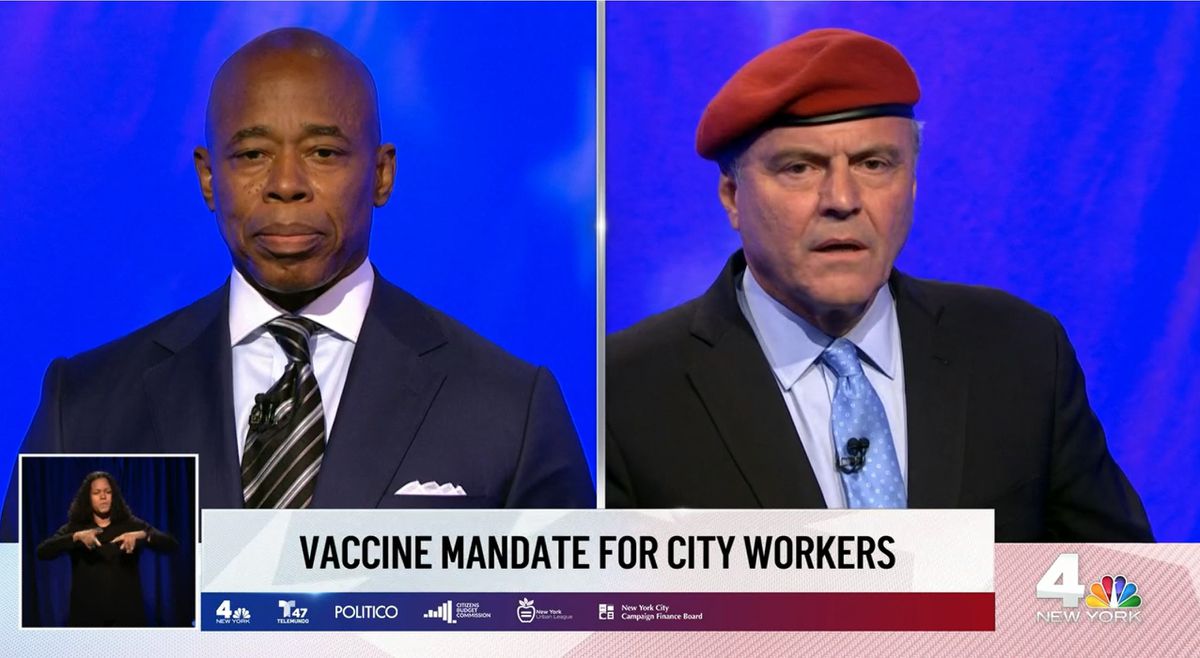 Eric Adams and Curtis Sliwa clashed along deeply personal lines during their first mayoral race debate Wednesday night, accusing each other of “lies” and “buffoonery” while staking out drastically different paths for how to make the city safer and more prosperous after nearly two years of pandemic strife.

With the Nov. 2 mayoral election less than two weeks away, Adams and Sliwa covered plenty of ground in the hour-long debate at WNBC’s Midtown studio, including squabbling over COVID-19 vaccine mandates, public safety, a plan for congestion pricing in Manhattan, the crisis on Rikers Island and how to make the city more storm resilient.

But it was when matters turned to the two men’s private lives that sparks flew.

“He made up crimes, New Yorkers. That in itself is a crime,” Adams said about Sliwa’s admission that he faked violent incidents in the 1970s to draw media attention to his crime-fighting vigilante group, the Guardian Angels.

The Republican nominee faces long, if not impossible odds in the mayoral race, and acknowledged he “made mistakes” and was “immature at the age of 25″ before pivoting to rip Adams for recently hanging out at a tony Manhattan nightclub.

“Eric Adams is with the elites in the suites, the TikTok girls, trying to sort of live up to the Kardashians at club Zero Bond. Come on, Eric,” said Sliwa, who wore his quintessential red beret for the occasion. “Come back to the streets and the subways. Hang with the real peeps.”

Adams, the Brooklyn borough president and Democratic nominee, is heavily favored to win next month’s election thanks to the city’s deep blue demographic.

In that sense, Wednesday night’s debate was more of a box-checking formality for Adams than an occasion where he needed to get into the mud with Sliwa — and he waved off repeated personal shots from the Republican.

“Stop the lies, and stick with the facts,” Adams said after Sliwa incorrectly claimed the BP has announced plans to travel to both Puerto Rico and Florida the day after his likely inauguration in January.

Asked to respond to another Sliwa jab, Adams said, “I’m speaking to New Yorkers, not speaking to buffoonery.”

When it came to policy, Sliwa was noticeably lighter on specifics than Adams.

Addressing pandemic-related crime spikes, Adams, a retired NYPD captain, said he would as mayor beef up the police department, including by reinstating a controversial plain-clothes anti-crime unit that was disbanded in 2020. He said he would balance out the muscular police presence by making it easier to fire officers found guilty of misconduct.

Sliwa said he’d pull the city’s police back to the era of “stop and frisk” — a tactic deemed unconstitutional by a federal judge. When a moderator pointed out the policy’s unconstitutionality, Sliwa deadpanned: “It is constitutional.”

Turning to the pandemic, Adams voiced support for requiring school children to be vaccinated against COVID-19, while saying he’s “open” to the idea of providing a remote learning option for those who don’t want the shots.

He said he also backs Mayor de Blasio’s new coronavirus mandate for all public city workers, though he took issue with Hizzoner’s decision to not talk it through with municipal union leaders before unveiling the rule. “I would have handled it differently,” Adams said.

Sliwa, by contrast, railed against de Blasio’s municipal mandate, stressing personal choice should take priority despite the raging pandemic and saying he wants to leave vaccines in schools up to parents.

“How about getting parental involvement? Do we not want parents involved in this process?” he said.

Sliwa also said he’d focus on building “sea walls” along city coast lines to protect against the damage from deadly storms like Hurricane Ida, whose remnants had a devastating impact on New York.

“It had nothing to do with sea walls,” Adams said, asserting the way to protect against storms is “intervention and prevention,” including updating outdated sewer systems and developing better evacuation protocols.

Adams voiced support for a plan to shutter the jail and replace it with four smaller lockups, though he said more attention needs to be paid to “placement” to ensure safety and equity. Sliwa vowed that as mayor, he’d keep Rikers running and set up camp at the “warden’s house” on the island.

In another instance of throwing red meat to the GOP base, Sliwa slammed a push for congestion pricing in Manhattan in order to drive down car traffic. “This would crush the middle class residents coming in from Staten Island,” he said. Adams argued congestion pricing is a sensible idea, but proposed carving out “waivers” for some drivers, including those who come into Manhattan for medical appointments.

Sliwa frequently tried to steer the debate away from policy and toward recent controversies that have engulfed Adams — and zeroed in on allegations that Adams may not be staying full time at his Brooklyn brownstone apartment, and that he’s submitted incorrect tax records about the residence that appear to have benefited him financially.

Adams demurred, saying the Brooklyn apartment is his “primary residence,” though he declined to say how often he stays there. “I don’t jot the number of days I’m there,” he said, “but that’s where I lay down my head.”