Enraged Queens motorist punches out two men who struck his car, steals their wallet and cellphones 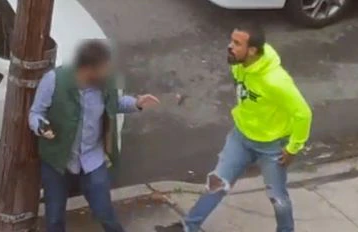 A Queens motorist enraged over a minor fender bender was caught on video punching out the two men who struck him and then driving off with their wallets and cellphones, police said Tuesday.

“Give me some money or I’m gonna f— you up,” the unhinged driver screamed before pummeling one victim unconscious on the street in Jackson Heights about 7 p.m. Saturday, cops said.

The attacker was zipping down 70th St. in a gray Honda Accord when a white Nissan Sentra pulling out of a parking lot near 32nd Ave. sideswiped him.

The incensed Honda driver slammed on his breaks and got out to confront the two men in the Nissan, demanding money to cover the minor damages, police said.

Ignoring his girlfriend’s attempts to intervene, the Honda driver knocked the Nissan’s 55-year-old passenger out cold with a couple quick punches to the head, startling surveillance video shows.

As the passenger lies unconscious flat out on the street, the Honda driver turns his attention to the Nissan’s 25-year-old driver as four men standing nearby watch but do nothing to intervene.

He punches the Nissan driver twice but the victim manages to stay on his feet, which appears to enrage the attacker more.

The assailant, wearing a fluorescent green hoodie and blue jeans, follows the Nissan driver a short distance up the block, cornering him against a parked car and utility pole.

The frightened victim crouches down with his hands up to protect himself but the attacker pummels him to the ground, then punches him again while the victim is down, the video shows.

One of the bystanders watching puts his hand on the assailant’s shoulder, interrupting the attack.

But the Honda driver turns his attention back to the still unconscious passenger, roughly flipping him onto his his side to snatch a cellphone or wallet from under the victim.

The Nissan driver, now back on his feet, tries to intervene but the assailant comes towards him again and the victim steps back with his hands in the air.

Their goateed attacker has not been caught. Cops are asking the public’s help identifying him and tracking him down. He was wearing blue jeans with rips around the knees and the fluorescent green hoodie.