‘Embarrassed’ Cuomo responds to sexual misconduct claims, says no intention of stepping down 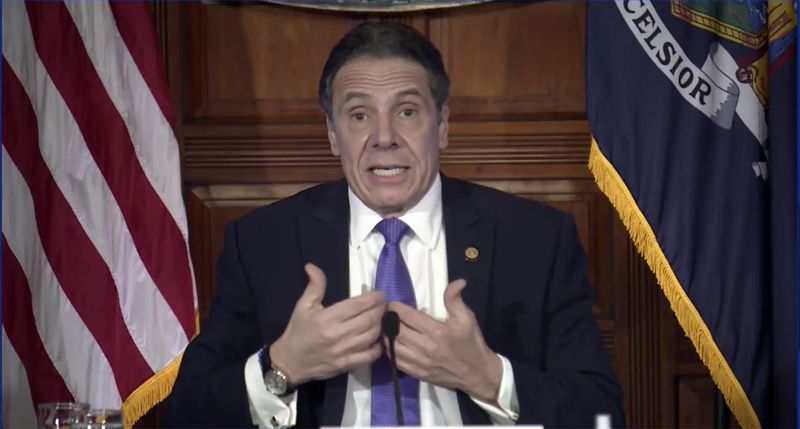 An “embarrassed” Gov. Cuomo choked up Wednesday as he addressed sexual harassment claims made against him and resisted calls for his resignation.

The governor addressed the mounting accusations for the first time during a remote briefing from the State Capitol, apologizing for acting “in a way that made people feel uncomfortable” and saying he “never touched anyone inappropriately.”

Cuomo said while he is “embarrassed” by the allegations, he wants New Yorkers to hold off on forming an opinion on the matter until the conclusion of a just begun probe being conducted by Attorney General Letitia James.

The embattled governor, whose briefings were considered must-see TV for much of the COVID crisis, had not taken questions from the press in over a week as his administration became embroiled in multiple scandals.

The appearance and mea culpa, which he said was made against the advice of his lawyers, came as legislators and critics call for his removal over the misconduct allegations and uproar over the administration’s withholding of data related to the number of nursing home residents who died of COVID-19.

James’ investigation will focus on Cuomo’s workplace conduct after former aide Charlotte Bennett said the governor questioned her about her sex life and asked whether she would be open to a relationship with an older man as the two worked on the state’s pandemic response last spring.

Bennett, 25, a former executive assistant and health policy adviser, said she resigned from the administration in November, months after alerting the governor’s chief of staff to her concerns.

“I understood that the governor wanted to sleep with me, and felt horribly uncomfortable and scared,” she told The New York Times.

Another former aide, Lindsey Boylan, said Cuomo kissed her without her consent during a meeting at his Manhattan office and accused the state’s most powerful Democrat of creating a toxic workplace.

Cuomo has flatly denied Boylan’s allegations and apologized for his behavior with Bennett, claiming he’d been trying to be “playful” and that his jokes had been misinterpreted as flirting.

The 63-year-old expanded upon that sentiment at Wednesday’s press briefing.

“I fully support a woman’s right to come forward,” the governor said. “I now understand that I acted in a way that made people feel uncomfortable. It was unintentional, and I truly and deeply apologize for it. I feel awful about it, and frankly, I am embarrassed by it. And that is not easy to say, but that is the truth.”

Another woman, Anna Ruch, came forward with claims, and photos, on Monday, alleging that Cuomo crossed a line when he touched her and asked to kiss her at a September 2019 wedding of one of his longtime aides.

Cuomo, who repeatedly stressed that he “never touched anyone inappropriately,” said the awkward photo just shows his “customary” way of greeting people.

The governor went on to say that he now understands that if his behavior made anyone uncomfortable then he is sorry.

Bennett’s attorney, Debra Katz, excoriated Cuomo over his claims that he meant no harm and is only now realizing he was in the wrong, noting that her client made several people in the office aware of his behavior.

“We are confident that they made him aware of her complaint and we fully expect that the attorney general’s investigation will demonstrate that Cuomo administration officials failed to act on Ms. Bennett’s serious allegations or to ensure that corrective measures were taken,” she added.

Elected officials who have called on Cuomo to step down in light of the allegations also categorized his contrition as too little, too late.

“Reminder: Apologizing does not remove the toxic behavior or harm caused by yourself or your administration,” tweeted Sen. Alessandra Biaggi (D-Bronx), one of the first of Cuomo’s fellow Democrats in the state to call on him to resign. “I’m upset that my governor would think that he can erase his abusive behavior by saying I’m sorry.”

The governor brushed off the growing calls for his resignation, coming from Republicans and Democrats alike, to nothing more than politics.

“I’m not going to resign,” he said. “I work for the people of the state of New York. They elected me.”

But polling conducted this week reveals that the third-term governor is facing an uphill battle toward reelection next year and many critics repeated their calls for him to step down as budget negotiations get underway in Albany.

Sen. Gustavo Rivera (D-Bronx) called the briefing a “masterclass in gas lighting, but changes nothing.”

“So, once again: his deeply toxic style of leadership does NOT lead to good governance. He needs to resign,” he added.