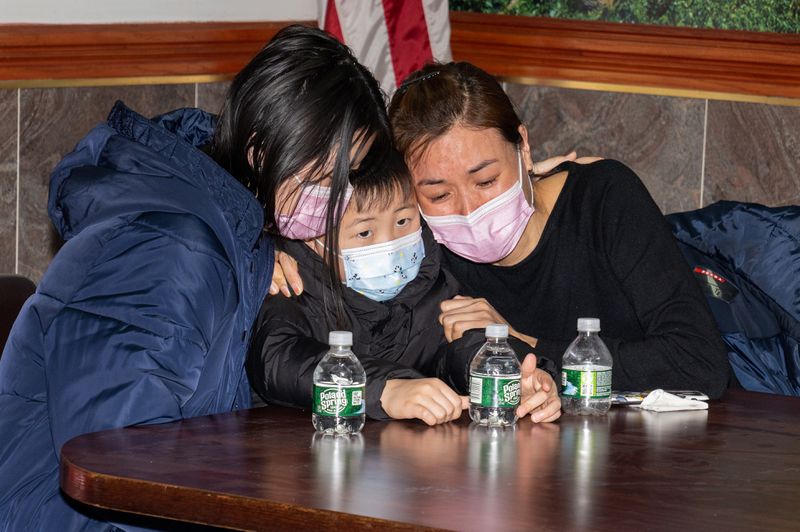 An ex-con accused of stabbing a good Samaritan to death with a screwdriver in Brooklyn had 10 accomplices when he robbed an illegal gambling den in Brooklyn, prosecutors said Tuesday.

The robbery victims chased some of the crooks, leading to a crazed clash between the two groups of men near Seventh Ave. and 57th St. in Sunset Park about 9:30 p.m. Friday.

William Smith had the help of nine or 10 accomplices, who are all still being sought, when he held up the gambling den, prosecutors revealed during Smith’s arraignment in Brooklyn Criminal Court early Tuesday. Police initially said he had at least two accomplices.

Smith is charged with murder, assault and robbery. He was ordered held without bail and is due back in court Thursday.

Good Samaritan Yong Zheng, 46, came upon the two groups of men fighting in the street and tried to break it up, authorities said. That’s when Smith, 45, allegedly stabbed Zheng four times in the chest with a screwdriver.

Zheng’s friend Xiong Lin, who had just had dinner with Zheng, also tried to intervene in the brawl but walked away with minor wounds. Friends say Zheng suspected he was witnessing a hate crime against fellow Asians when he jumped into the fray.

Two victims of the robbery who chased the crooks were also wounded in the ensuing clash: a 39-year-old man knifed twice in the arm and once in the chest and a 42-year-old man stabbed in the lower back, police said. They were taken to NYU Langone Hospital-Brooklyn, where Zheng died, police said.

Smith was taken into custody early Saturday in Bushwick after police tracked his white Mercedes-Benz there. A witness took a picture of the license plate and gave it to police, the source said. Cops charged Smith with the murder Sunday evening.

He was caught on surveillance video wearing a black hoodie with a smiley face on it during the slay and confessed to the murder after he was caught, a police source said.

Zheng, who worked as a bus driver before the COVID pandemic and was the sole provider for his wife and two children, recently moved his family to Philadelphia because he feared they would contract coronavirus in New York.

“I want them all arrested. I want them to be executed,” Zheng’s widow Jin Zhao, 39, said of the attackers Sunday, as their 4-year-old son wiped tears from her face. “Every time I look at my son, I think about the fact that he has no father.”