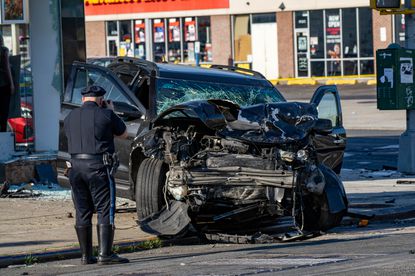 First there was the bitter agony of Mohammed Hossain’s death by an accused unlicensed drunk driver.

Now the grieving family of the 47-year-old Brooklyn Lyft driver — already tortured by what they see as an incomprehensible and slow-moving legal system — is furious the accused killer, Erik Chimborazo, has twice failed to show up in court and is now in the wind.

A warrant is currently out for his arrest.

At the Borough Park home of Houssain’s extended family, his widow, Kulsuma Jahan, the mother of their three children — 14-year-old Samin, 7-year-old Lyba and 2-year-old Labeen — was stunned to hear Chimborazo was still free.

“It’s crazy. It just has to stop,” Jahan told reporters on Monday. “Allowing criminals on the street…. He killed someone, someone who had so much to live for.

“He went to work and the next second he was gone,” she added, speaking of her husband. “Our lives were shattered before our eyes. What is the city going to do about it?”

In April on Facebook Chimborazo, in Spanish, proudly called his Explorer “my baby girl.”

A prosecutor said in court that Chimborazo blew double the legal blood alcohol limit roughly two hours after the crash — which suggests he was even drunker than the three beers he told police he consumed.

He was charged with vehicular manslaughter, driving without a license and DWI.

When the bail reform laws took effect in January 2020, vehicular manslaughter was one of the crimes for which a suspect could not be held before trial.

But when the laws were amended last summer, that charge was among those affected, meaning Chimborazo faced the possibility of bail. The Queens District Attorney’s office asked Chimborazo, who has no prior criminal convictions, be held on no bail but Judge Karen Gopee set it at $10,000, which the suspect made.

Hossain failed to show up in court on June 17, at which point a warrant was issued and he was given 48 hours to show up. That deadline passed but was extended and on June 21 Hossain came to court with his lawyer.

At that point, the DA’s office asked a second time for Hossain to be held without bail. But Judge Jerry Iannece continued the bail and, according to the source, did not grant prosecutors’ request Hossain be fitted with an electronic ankle bracelet.

On Tuesday, Hossain again skipped out on his court date, at which he was supposed to be arraigned following his indictment. Judge Michael Aloise issued another warrant.

“They let him go, back to back,” said Hossain’s outraged brother-in-law, Rezaul Rahman, 27.

Chimborazo has yet to surface. His lawyer, Milton Florez, did not respond to requests for comment.