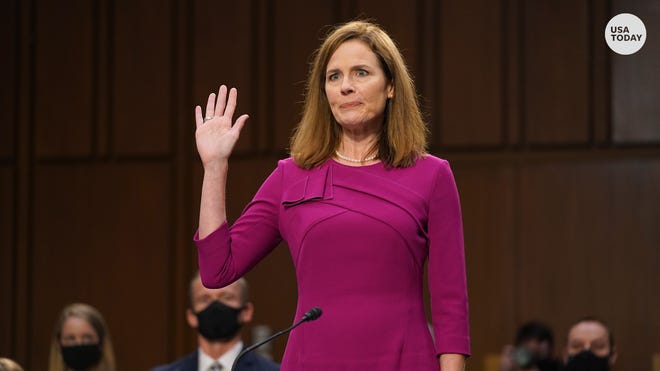 Dozens of faculty members at the University of Notre Dame inked their names to an open letter urging Judge Amy Coney Barrett, a former law professor at the school, to halt her Supreme Court confirmation process until after Election Day.

The letter carried 88 signatories from a range of disciplines at both the undergrad and graduate level, but no faculty members at Notre Dame Law School signed on.

“The rushed nature of your nomination process, which you certainly recognize as an exercise in raw power politics, may effectively deprive the American people of a voice in selecting the next Supreme Court justice,” said the letter, which was published Tuesday.

Barrett’s intense Senate confirmation hearings entered their second day on Tuesday, with Republican lawmakers touting the judge’s dazzling credentials, and irritated Democrats questioning the frenzied process amid a pandemic and the nominee’s views on Obamacare and abortion rights.

Barrett, 48, studied at Notre Dame Law School and started working at the prestigious law school in 2002, becoming one of its most popular professors. The conservative judge also met her husband at the South Bend, Ind., school.

Sen. Cory Booker of New Jersey flagged the faculty members’ views at the hearings. “They wrote an impassioned letter for the sake of our democracy,” the 51-year-old Democrat said, adding that “this is not normal.”

Professor Eileen Hunt Botting, who teaches political science at Notre Dame, said the letter was distributed through an electronic mailing list and that some law professors would have seen it. Faculty members at the law school have spoken glowingly about Barrett.

But Hunt Botting said Barrett, who describes her judicial philosophy as an “originalist” viewpoint, could show her respect for American democracy by pressing pause.

“An originalist justice must put her loyalty to the constitution above all else, and accepting this rushed and politicized nomination before the election threatens the integrity and stability of our nation’s liberal democratic constitutional order,” Hunt Botting said in an email.