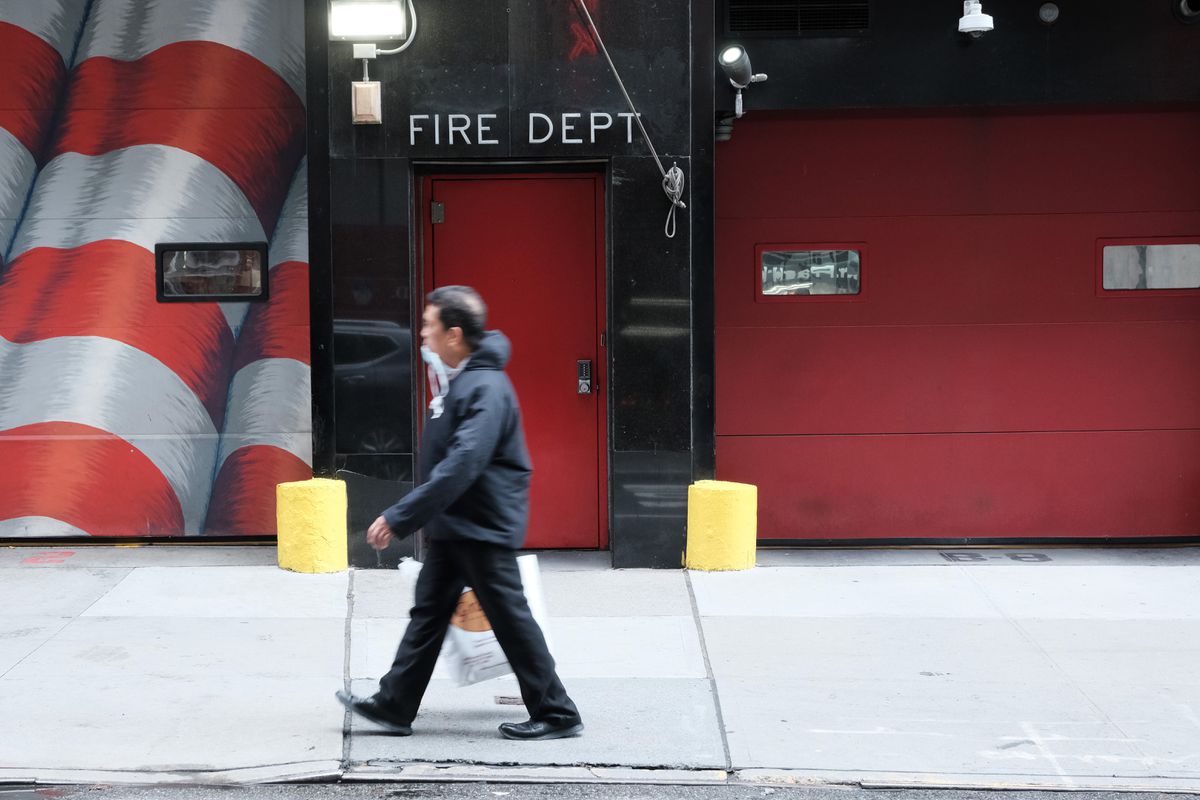 Mayor de Blasio on Monday attacked city firefighters for feigning illness to protest vaccination mandates — and promised consequences for those who don’t report to their jobs.

De Blasio employed the threatening rhetoric on the first day that city employees who’ve refused to get the vaccination can be docked pay for doing so. As of Monday morning, he said a total of 9,000 city workers are on leave without pay, or about 6% of the entire city workforce, which is approximately 378,000 strong.

But on Monday, he seemed to single out firefighters who are now being accused of faking sick to take time off.

“We have every reason to believe that there’s a lot of people out there claiming to be sick who are not. It’s not acceptable,” he said at his Monday morning news briefing. “The thing to do is to do the right thing. Come to work. Protect people — as you took an oath to do.”

Hizzoner added that so-called sickouts aren’t something the city tolerates and that “when people do this kind of thing, there are consequences.”

He specifically said the city would be on careful lookout for possible violations of the Taylor Law, which prohibits public employees from striking under certain circumstances.

De Blasio’s condemnation came a day after local media reported that about 2,000 FDNY members who took sick time are believed to be feigning illness — and almost two weeks after de Blasio announced that almost all city workers, with the exception of come Correction Department officers, would have to be vaccinated by Friday or be put on paid leave starting Monday.

“We know that’s related to protests against the mandate. It’s obvious,” Nigro said. “Generally, two hundred people come into our medical office every day. In this past week, it’s been seven hundred a day. Most, or the majority of them, are unvaccinated. This is completely unacceptable.”

Nigro said that as of Monday morning, 2,300 firefighters have called in sick since the city issued its mandate.

“It’s continued day in, day out,” he said. “We’ll look into discipline for these members.”

Nigro didn’t appear to leave room for doubt over what’s going on, saying that hundreds of firefighters “most definitely are” taking medical leave without a legitimate reason.

”The commissioner can not claim that unvaccinated firefighters taking medical leave is causing the staffing shortage. By the commissioner’s own admission, the ‘vast majority’ of them are unvaccinated, and would have been sent home this morning by the mayor anyway thanks to his dangerous mandate,” said United Firefighters Association President Andrew Ansbro. “It is common knowledge that firefighters work hurt. It would only be natural for these firefighters to seek treatment and document their injuries before they are let go by the mayor. This crisis is clearly on the mayor.”

Despite the apparent sick-out, de Blasio said the FDNY has continued to deliver “strong, good, normal” response times to fires. When asked whether the lack of a discernible disruption in city services translated into an indication that some agencies are bloated with too many employees, de Blasio dodged the question, saying merely that workers who engage in sick outs “get the public, in fact, angry, when people are paying taxes, but not getting the service they deserve.”

Nigro noted that there are currently 18 FDNY units that aren’t operating — out of a total of 350 units citywide. He added that many active units are understaffed as well.

“That understaffing could end immediately if members stopped going sick when they weren’t sick,” he said.

While he and de Blasio took a hard line against firefighters, the mayor also touted increases in the overall vaccination rate among city workers as a sign his mandate is largely working according to plan.

The mayor and other top officials announced Monday that vaccination rates have climbed across the board since the last mandate was issued, with the NYPD’s rate climbing to 85% of all workers with one dose compared with 70% before, firefighters up 77% from 58% and sanitation workers up 88% from 61%.

Along with firefighters calling in sick, the mandate has sparked protests across the city and has led to other types of backlash.

Sanitation Commissioner Edward Grayson confirmed Monday that garbage trucks in Queens were targets of vandalism a week ago — their coolant hoses cut and tires slashed — in what was apparently a response to the vaccine mandate.

Grayson said the department filed a police report and the matter is now under investigation.