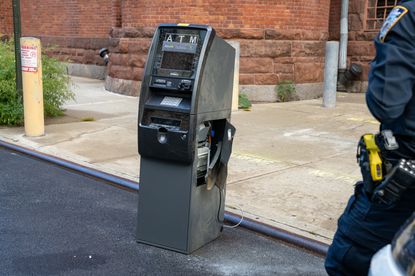 A pair of crooks cracked an ATM and dumped it outside of a Brooklyn homeless shelter early Friday, creating a surreal scene where cash is usually in short supply.

Police said two Hispanic men in a white van pulled up to the Atlantic Men’s Shelter on Bedford Ave. and Pacific St. in Crown Heights just before 3 a.m.

The pair pulled the ATM out of the back of the van, stood it upright outside the shelter by the curb and sped off, cops said.

Cops were trying to determine where the ATM came from. Its side was ripped off.

It also was not clear if the ATM had just been stolen or if the thieves grabbed it long ago and only recently decided to discard it.

In November, two muscle-bound men were spotted taking a standalone cash machine from outside Piz-zetta Pizzeria on Livingston St. near Boerum Place in Downtown Brooklyn, cops said. Witnesses saw the thieves drag the ATM to the back of a white van before speeding off.

On Aug. 14, 2020, a pair of crooks tore an ATM from the wall from an Avenue C deli in the East Village and sped off with it in a white van.

Then, in June 2020, two men were linked to three standalone ATM thefts in the Bronx, where cash machines were taken from a pizzeria, a laundromat and a hotel.

Although a white van was used in a number of the ATM thefts, it was not immediately clear if any of the crimes are connected.

Anyone with information about any of these thefts is urged to call NYPD Crime Stoppers at (800) 577-TIPS.