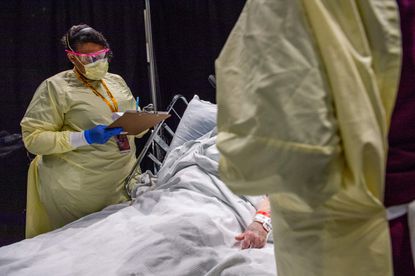 It’s the gift that keeps on giving.

Eighteen members of one Pennsylvania family have been diagnosed with coronavirus after an ill-fated December holiday gathering morphed into a superspreader event, reported Philadelphia TV station WPVI.

One day before guests were scheduled to arrive at Darlene Reynolds’ home in Milmont Park, Pa., she noted a tickle in her throat. But she paid no heed to the health red flag and continued to prep for the major get-together.

But the arriving guests, one by one, quickly fell ill.

Inexplicably, Reynolds wasn’t sure COVID-19 was the culprit.

In all, a dozen and a half family members ranging in age from 1 to 62 became infected, WPVI reported.

The Keystone State has been struck hard by coronavirus with more than 777,000 reported cases as of Tuesday, according to the Pennsylvania Department of Health website.

Nearly 19,500 Pennsylvanians have lost their lives to the disease — more than the entire totals of Canada, Chile and Pakistan, noted health tracker Johns Hopkins University.

The COVID-19 death toll in America has eclipsed 400,000 casualties. With the global death tally at just over 2 million victims, nearly one in every five coronavirus fatalities has been an American.