Trump pardons Steve Bannon, other political allies as part of clemency blitz in final hours of his presidency 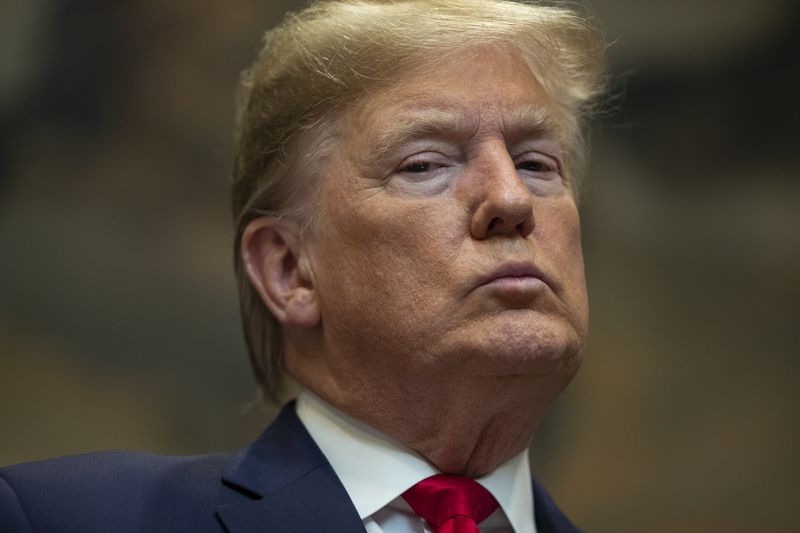 President Trump pardoned Steve Bannon, his disgraced former chief strategist, as part of an 11th-hour clemency spree early Wednesday that also covered a Republican Party mega-donor and a couple of controversial rappers — but no one named Trump was in the mix despite talks of get-out-of-jail-free cards for several members of the first family.

Trump, who will return to life as a private citizen when President-elect Joe Biden is inaugurated at noon Wednesday, held off on announcing the batch of a whopping 143 clemency actions until after midnight Tuesday, keeping the incessant drama of his presidency intact until the bitter end.

Bannon stood out as the most controversial clemency recipient on the lengthy list, which the White House finally released at 12:51 a.m. — just over 11 hours before Biden’s swearing-in ceremony.

A major force behind Trump’s 2016 election, Bannon was charged by federal prosecutors in Manhattan last summer with defrauding hundreds of thousands of Trump supporters through an alleged self-enrichment scheme that he advertised as a campaign to bankroll the president’s signature Mexican border wall proposal.

Trump, who derisively nicknamed Bannon “Sloppy Steve” after firing him from the White House in August 2017, didn’t even dispute the charges against his former right-hand man in a statement explaining the pardon.

“Prosecutors pursued Mr. Bannon with charges related to fraud stemming from his involvement in a political project,” the statement said. “Mr. Bannon has been an important leader in the conservative movement and is known for his political acumen.”

The pardon of Bannon is particularly eyebrow-raising in that he hasn’t been convicted of any crimes and is awaiting trial.

Presidents have historically only offered clemency to those who have been convicted. Bannon, who has denied the charges against him, is in effect receiving a preemptive pardon.

Remarkably, Bannon’s three co-defendants — who stand accused of the same crimes — were not pardoned by Trump.

Beyond Bannon, a high-profile individual on the clemency list was Elliott Broidy, a deep-pocketed former Republican National Committee Finance chairman, who was indicted in October on charges that he illegally lobbied the Trump administration to drop a major U.S. fraud case against a wealthy Malaysian businessman. Broidy pleaded guilty late last year, but Trump’s pardon squashes the conviction.

Broidy, who has raised millions of dollars for Trump and other Republicans, did not immediately react to his pardon, and neither did Bannon.

Trump also didn’t explain his pardon of Broidy, only saying the GOP donor “is well known for his numerous philanthropic efforts, including on behalf of law enforcement.”

Lil Wayne and Kodak Black, a couple of Trump-supporting rappers charged with gun crimes, also received pardons, as did former Detroit Mayor Kwame Kilpatrick, a Democrat, who’s in federal prison serving a 28-year sentence for a laundry-list of corruption crimes, including racketeering, bribery, extortion and fraud.

Another Trump associate on the list was Ken Kurson, a close friend to Jared Kushner, who was charged with cyberstalking last fall as part of a messy divorce from his wife. “This investigation only began because Mr. Kurson was nominated to a role within the Trump administration,” Trump claimed in a statement.

Notably absent from the list of clemency acts was anyone named Trump.

Since losing the Nov. 3 election, Trump has repeatedly conferred with advisers about the possibility of preemptively pardoning three of his adult children and even himself amid concern that they could face a variety of legal jeopardy once he loses his presidential immunity.

But Trump’s interest in keeping the pardons in the family apparently fizzled after the deadly Jan. 6 attack on the U.S. Capitol, with advisers warning him that attempts at self-clemency would amount to an admission that he incited the riot with his inflammatory attempts to overturn Biden’s election.

Still, Trump technically has until noon Wednesday to issue more pardons if he wants, and the soon-to-be ex-president is known to be unpredictable.

Also not on the list was Rudy Giuliani, Trump’s personal attorney.

Giuliani, who has not been charged with any crimes but faces scrutiny from federal prosecutors over his business dealings in Ukraine, said before the late-night announcement that he had told Trump to not give him a pardon.

“I told him I don’t want or need one,” Giuliani told the Daily News in a text message.

The Bannon pardon may rub some in Trump’s family the wrong way.

After getting booted from the White House, the right-wing politico lambasted Donald Trump, Jr., as “treasonous” for meeting with a Russian lawyer during the 2016 campaign and called Ivanka Trump “dumb as a brick.” The fiery criticism of Trump’s kids prompted the president to issue a statement saying his former right-hand man had “lost his mind.”

The plan was initially to keep the pardons rolling on a weekly basis thereafter, according to reports, but Trump put the spree on pause after inciting his supporters to storm the Capitol on Jan. 6, leading Congress to impeach him for an unprecedented second time.

Noah Bookbinder, a former federal corruption prosecutor who now leads the Citizens for Responsibility and Ethics in Washington, was aghast at Trump’s last-minute pardons and drew an unflattering parallel to President Richard Nixon.

”Even Nixon didn’t pardon his cronies on the way out,” Bookbinder said. “Amazingly, in his final 24 hours in office, Donald Trump found one more way to fail to live up to the ethical standard of Richard Nixon.”