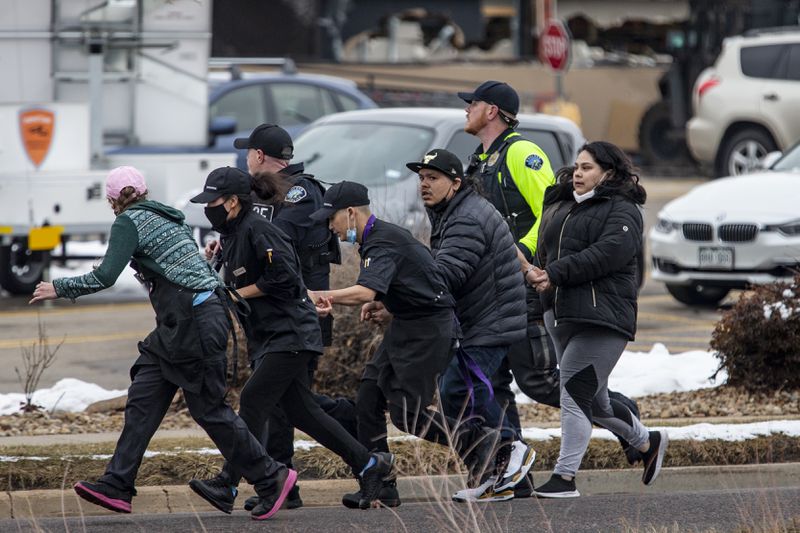 A police officer was among several people shot dead Monday at a King Soopers grocery store in Boulder, Colo., according to cops.

Investigators gave few details at a press conference Monday evening, saying only that the call had come in just before 3 p.m.

Details were scant on what had happened, what the shooter’s motive might have been, and even how many fatalities there were. Police said families were still being notified and that more information would be released later in the evening. KMGH-TV said six people had been confirmed dead.

“We had a very tragic incident,” Boulder police commander Kerry Yamaguchi said, briefing reporters. “Multiple people were killed in this incident, and I’m sorry to have to report that one of them was a Boulder police officer.”

KMGH reported that the officer in question, who like the other victims was not identified pending notice of next-of-kin, might have run into the store and saved lives before being shot himself.

A “person of interest” was in custody, and he was the only one known to be wounded, Yamaguchi said.

Boulder Police told ABC News that a suspect in the store’s parking lot shot at officers who were responding to a “shots fired” report but the timeline wasn’t exactly clear.

According to CBS 46 reporter Shon Gables, a radio scanner relayed that a suspect with a rifle and body armor was still on the loose and multiple people were motionless outside the store and one officer had been wounded inside the store.

Officers had their guns drawn, and some windows at the front of the store were broken. Authorities over a loudspeaker said the building was surrounded and that “you need to surrender.” They said to come out with hands up and unarmed.

At one point, a shirtless man with blood running down his leg was escorted out of the store in handcuffs by two police officers. An ambulance later left the scene, presumably carrying the bleeding man.

Law enforcement vehicles were seen outside the King Soopers store, including SWAT teams. Reports said at least three helicopters were on the roof of the store in the city about 25 miles northwest of Denver.

No other suspect information was available.

“Like my fellow Coloradans, I am closely watching unfolding events at King Soopers in Boulder,” Polis wrote. “My prayers are with our fellow Coloradans in this time of sadness and grief as we learn more about the extent of the tragedy.”

Shortly after 7 p.m. EST Monday, Boulder Police advised the public to stay away from a residential area near the store and “to shelter in place while they respond to report of armed, dangerous individual” which police were not sure was connected to the earlier shooting situation.

FBI agents from Denver arrived on the scene after 7 p.m. and “are assisting with an investigation into an active shooter situation,” potentially indicating the suspect or suspects remained at-large.

A man who said he was shopping told KCNC-TV that he heard three loud bangs, leading to shoppers running. They fled to the back of the supermarket, where workers led them to a way out of the store. He said they walked single file, with their arms on the backs of those in front of them.