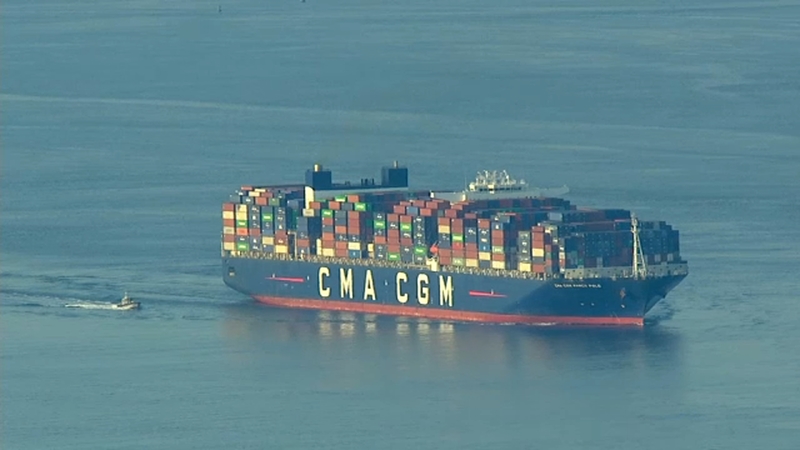 It’s the largest container ship ever to call at any U.S. East Coast port.

The Marco Polo is calling at ports in North America after a voyage from Southeast Asia through the Suez Canal.

The raising of the roadway of the Bayonne Bridge to a navigational clearance of 215 feet and the deepening of the navigational channels to 50 feet allow some of the world’s largest and newer, more environmentally friendly cargo vessels to serve the seaport’s container terminals in New Jersey and Staten Island.

Before Bayonne’s new roadway was completed in 2017, the bridge’s previous height clearance of 151 feet limited access for larger cargo vessels.

“The CMA CGM Marco Polo’s arrival at our seaport underscores the Port of New York and New Jersey’s ability to serve the ultra-large cargo container ships that increasingly carry the food, supplies, and goods needed to sustain millions of residents, support thousands of jobs and keep businesses open,” said Rick Cotton, executive director of The Port Authority of New York and New Jersey. “The Port Authority’s infrastructure improvements such as the raising of the Bayonne Bridge and the deepening of the navigational channel serving our seaport have made possible this historic moment. These infrastructure improvements also have helped generate record cargo volumes and enabled our supply lines to remain extraordinarily robust during the pandemic.”

The Port of New York and New Jersey will be the CMA CGM Marco Polo’s first port of call in the U.S.

The ship will unload clothing, pharmaceuticals, furniture, appliances, holiday decorations, building materials, home fixtures, and food due for distribution to businesses throughout the region and beyond.