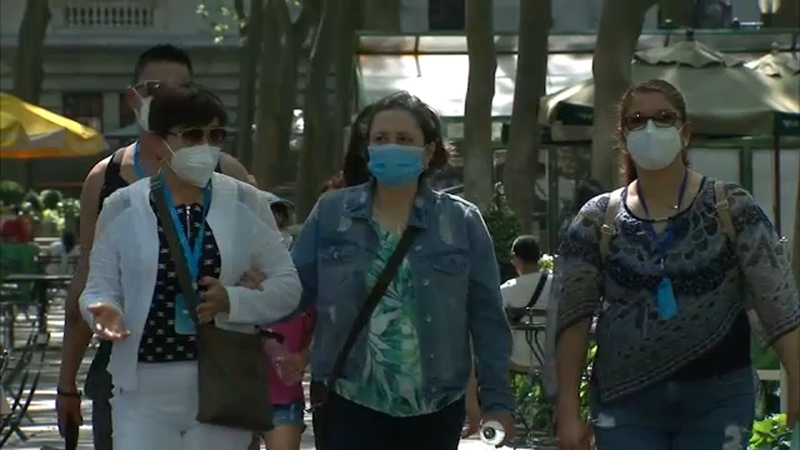 Small business owners are left trying to figure out how to govern New York’s new indoor mask guidance based upon a customer’s vaccination status.

Some businesses say they will not ask customers if they’ve been vaccinated, and plan to operate on an honor system.

Even at businesses allowing masks to be removed, many customers said they will mostly keep their mask on.

Many people were still walking around New York City in masks despite the relaxation of the mask requirement.

Despite the relaxation of mask policies, some businesses are still keeping their mask requirements in place, saying it’s hard if not impossible to get people to prove they are vaccinated, and therefore can take off their mask.

More than half of eligible New Yorkers have had at least one dose of the vaccine.

Even as infections, hospitalization and deaths are declining in the state, health officials are concerned because the rate of vaccinations is also falling.

New York City is hoping that offering vaccination clinics at popular locations for families in addition with free tickets to come back for a 2nd visit will incentivize people ages 12+ to get the vaccine.

In New Jersey, Governor Phil Murphy is also offering incentives to get the vaccine.

Including the possibility of dinner with himself and his wife.

At state parks, and the state beach they’re offering a free season pass if you get the shot before Independence Day.

And they are also offering free wine or beer for those who get their shot.

Governor Murphy said New Jersey is on track to having 70% of those over the age of 18 with at least one shot Thursday or Friday. Giving the state herd immunity, if it were an island.

Meantime, Dr. Bruce Polsky, Chairman of Medicine at NYU Langone Hospital – Long Island, said fully vaccinated people do not need to worry if unmasked people are lying about their vaccination status.
“You’re protected and that’s the whole idea – the vaccination is protective,” he said.

Polsky said unvaccinated people who take off their masks indoors are only putting themselves at risk.

“They’re only exposing themselves. There’s no gain in it for them,” he said.

Polsky said if people are vaccinated, but are still nervous about being indoors without a mask on, they should wear one to make themselves feel comfortable.