Charges dropped against cop, but lawyer says damage won’t be easy to undo 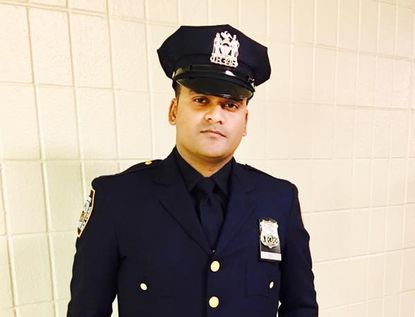 A cop accused of threatening to kill his wife has been cleared of any wrongdoing, reporters have learned.

But the lawyer for Officer Sazal Roy — who was a rising-star singer before joining the NYPD — says the damage from Roy’s ex-wife’s allegations might be irreparable.

Roy has been assigned to a desk job the past two years, stripped of his gun and shield — and his ex-wife’s accusations made it nearly impossible for him to pursue his other passion: singing songs in his native Bengali.

Roy was arrested in May 2020 for threatening to shoot his then-wife, Rokshana Mirza in the head during an argument in their Queens Village home, police said at the time. She also accused Roy of trying to smother her with a pillow.

“I haven’t done anything that she said,” Roy had told reporters.

And he stood by that pronouncement, repeatedly telling his lawyer he wanted to be fully exonerated and would not plead to a lesser charge or accept an adjournment contemplating dismissal, London recounted.

According to London, the wife kept changing her story, including when the incidents happened.

Mirza did not respond to a request for comment.

The charges against Roy — menacing with a gun, criminal obstruction of breathing and harassment —were dismissed March 23, London said. The Queens District Attorney’s office said there is no public record about the case.

Roy, who joined the NYPD in 2016, was placed on modified duty at the time of his arrest and transferred from a transit command to Brooklyn courts.

“It’s a great competition for us and the Bengali people,” Roy said at the time.

When Roy joined the NYPD he boasted on Facebook of his dual career.