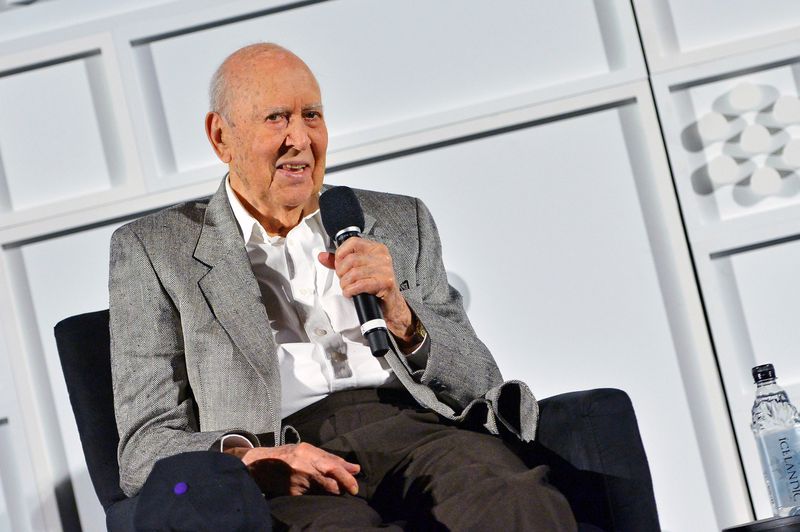 Carl Reiner’s first book was called “Enter Laughing,” and it truly was the story of his life.

The Bronx native, a comedy titan as a writer, producer, actor and director for decades, best known for creating “The Dick Van Dyke Show,” died Monday at 98.

“Last night my dad passed away,” his son, actor Rob Reiner, tweeted Tuesday. “As I write this my heart is hurting. He was my guiding light.”

The comedian’s family was with him when he died, according to TMZ.

Carl Reiner could truly do it all. He directed comedy smashes such as “Oh God” with George Burns and “The Jerk” with Steve Martin, and sold millions of records as the straight man to pal Mel Brooks’ 2000 Year Old Man.

But television was perhaps his best medium. He became a a hot commodity as Sid Caesar’s foil in the 1950s, but it was the role he didn’t play that may have brought his greatest contribution to comedy culture.

After his time with Caesar, Reiner was offered starring roles in sitcoms, but he thought the scripts were weak. Reiner’s wife, Estelle, said that he could write a better show, so that’s what he did, creating a autobiographical pilot, in which he starred. It went nowhere.

Actor-turned TV producer Sheldon Leonard, however, saw the failed pilot, and offered to give it another shot. Reiner said he didn’t want to be disappointed again, but Leonard had a solution.

“He says, ‘You won’t fail. I’ll get a better actor to play you,'” Reiner recalled to Conan O’Brien.

The “better actor” was Dick Van Dyke, and with Reiner writing and producing, “The Dick Van Dyke Show” became a comedy classic. Van Dyke played Rob Petrie, a comedy writer living in New Rochelle, N.Y., at the time. The show deftly mixed Rob’s home life with Mary Tyler Moore as his wife and Larry Mathews as his son, and his office life opposite fellow writers Rose Marie and Morey Amsterdam.

The three wrote for the egotistical star Alan Brady. At first Reiner played Brady only from the back, but then realized Brady needed to be seen and heard, so he fully took on the character for occasional guest appearances.

“Carl was the brains behind everything,” Rose Marie said in an interview for the Archive of American Television. “His mind is brilliant for comedy.”

The show ran for five seasons, winning 15 Emmys, before Reiner and company decided to go out on top.

Remembering the life and career of Carl Reiner

Reiner often acted in small parts in his films, but was no slouch as an actor. He starred in “The Russians Are Coming, the Russians Are Coming” in 1966, and was a familiar face on the big and small screens for decades. Nearing 80, he began an acting renaissance with a role in 2001′s “Ocean’s Eleven,” opposite Hollywood heavyweights including George Clooney and Brad Pitt. He appeared in two “Ocean’s” sequels and piled up a string of guest starring credits in TV shows.

Reiner married Estelle when he was 21 and she was 29, and they were wed for 64 years until her death in 2008. They had three children, including Rob. For all the great lines Carl and Rob delivered, Estelle may have topped them both. In Rob’s 1989 film “When Harry Met Sally,” Estelle played the women in the restaurant who, after witnessing Meg Ryan’s fake orgasm, says to the waitress, “I’ll have what she’s having.”

Carl Reiner was active on Twitter as he neared a century of life, often tweeting his displeasure with President Trump.

He described himself as a “Jewish atheist,” and the people who knew and worked with him thought of him as a true mensch.

His death was met with an outpouring of condolences.

“Carl Reiner, Bronx born and bred, made TV comedy that endures to this day,” Gov Cuomo tweeted Tuesday. “He made America laugh — a true gift.”

Alan Alda, a friend of Reiner and a fellow actor, shared kind words as well.

“His talent will live on for a long time, but the loss of his kindness and decency leaves a hole in our hearts,” Alda wrote. “We love you, Carl.”

In a 1998 interview with the Archive of American Television, Van Dyke called Reiner a “wonderful man. To this day he’s probably my favorite human being that I’ve ever known.”