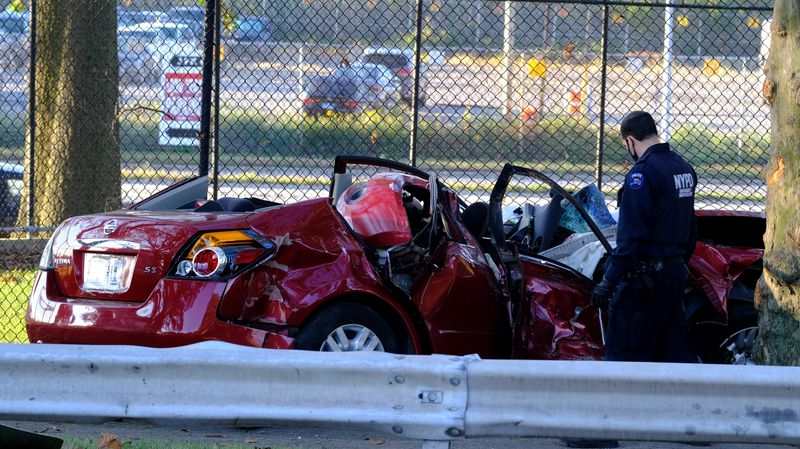 Two women and a man were killed when the car they were riding in slammed into a tree and caught fire in Queens early Tuesday, police said.

The driver lost control and crashed into the tree in South Ozone Park just outside Kennedy Airport about 3:50 a.m., cops said.

“I heard one big noise. One ‘Bam!’” neighbor Dave Singh said. “I jump out of my sleep and think I am dreaming but then I look outside and I see it.”

Singh and other neighbors rush over to North Conduit Ave. and 122nd St. where they found only one person moving inside the mangled wreck.

“The guy was alive,” he said about the front-seat passenger. “He was moving around and breathing. We were yelling at him, ‘Don’t sleep! Don’t sleep! Help is coming.’ But there was no way we could have helped because everything was pinned down and the door was locked.”

Firefighters were called in to put out the fire and pry the doors open to get access to the trapped occupants. More than 100 first responders pitched in, Singh said.

Three victims, who are believed to be in their 20s, died at the scene, officials said. Medics took a fourth person in the car, a 24-year-old man, to Jamaica Hospital in stable condition.

The lone survivor managed to crawl out of a window, Singh said.

ops were working to identify the three victims who died. Their bodies were badly burned, a police source said.

The NYPD’s Collision Investigation Squad was probing the cause of the crash Tuesday.

Singh and his neighbors believe the car was speeding when it hit the curb and “went airborne” until it hit the tree.

“It flew,” Singh said. “We heard one impact and didn’t hear any more.”

The intersection is about two blocks from where the Belt Parkway service road merges into North Conduit Blvd. Speeding is a major problem in the area, Singh said.

“There is too much speeding,” he said. “There is still debris on the road from an accident from three weeks ago.”

“We need a traffic light,” he added. “We also need a barrier for the sidewalk because a lot of kids use the sidewalk.”.