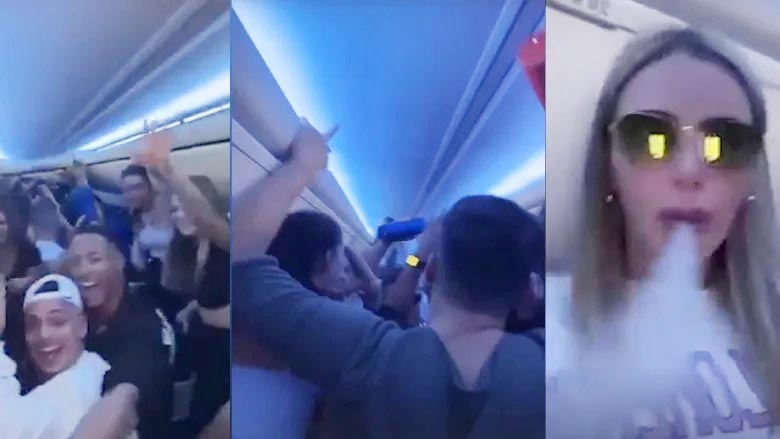 A group of Canadian social media influencers and reality TV stars are now stranded in Mexico, after at least three airlines refused to fly them home over a maskless on-air party.

The group flew from Quebec to Cancun aboard a Sunwing charter flight on Dec. 30. Footage of the wild ride showed many of the group disobeying COVID safety regulations by vaping, drinking alcohol and socializing without wearing any face masks while in the air.

The pre-New Year’s extravaganza sparked outrage in Canada; led to an investigation by both the airline and Transport Canada; and resulted in a public reprimand by Prime Minister Justin Trudeau.

“It’s a slap in the face to see people putting themselves, putting their fellow citizens, putting airline workers at risk by being completely irresponsible,” an “extremely frustrated” Trudeau told reporters Wednesday.

It also led Sunwing to cancel their return flight.

The group was given terms and conditions “to ensure the safety of the crew and passengers,” according to the airline.

However, according to a statement released by Sunwing, “the group did not accept all of the terms,” and as a result “we have made the decision to cancel the return flight.”

Two other Canadian airlines, Air Canada and Air Transat, later also refused to fly the group home, citing the safety of everyone traveling.

“With the information we currently have regarding the events that took place on the Sunwing flight, and to the extent that we can identify the passengers who were part of the group, Air Canada is denying boarding to ensure the safety of other passengers and its crew,” the airline said in a statement, according to CTV Montreal.

1/2 We are aware of the situation regarding disruptive passengers who have traveled to Cancun and are now attempting to return to Canada on our flights.

“We confirm that they will be denied boarding based on our legal and regulatory obligations to ensure the safety of both our passengers and crew, which is our top priority,” the statement added.

One of the passengers, 19-year-old Rebecca St. Pierre told The Canadian Press that she is now stranded in Tulum, Mexico. She said that the organizer of the trip, James William Awad, has “simply abandoned everyone.”

Another passenger, Isabelle Labrecque, told her followers in an Instagram Live video that some in the group “were sleeping” at the time and are being blamed “for things that we didn’t do.”

Transport Canada said that passengers could face fines of up to $5,000 Canadian dollars (about U.S. $3,900) per offense for violating Canadian Aviation Regulations.

On Wednesday night, about a dozen passengers were able to arrive in Montreal, CTV reported.