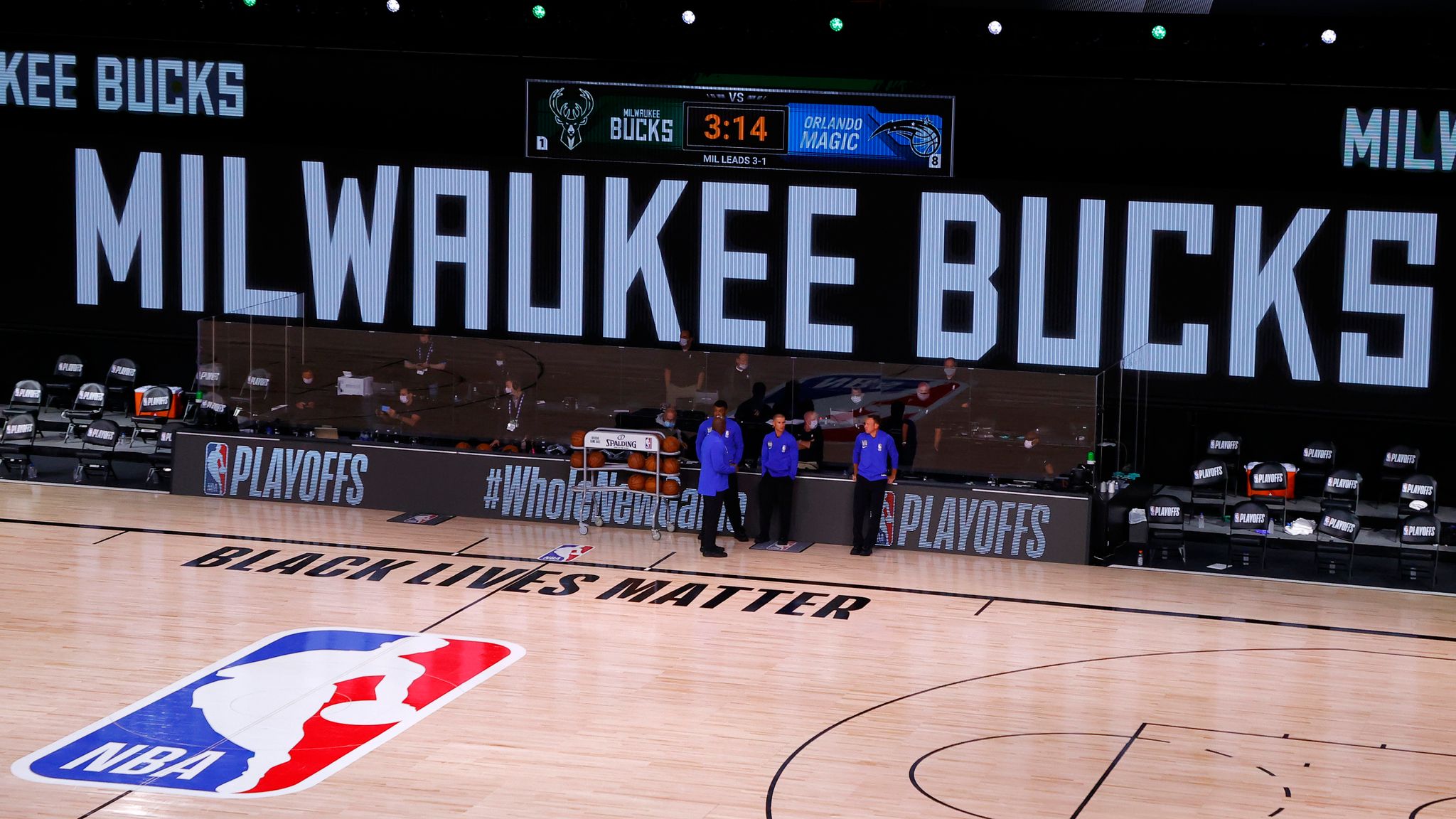 The message was heard but clearly not taken seriously. So the NBA players boycotted the playoffs while sending a stronger statement: These games don’t matter unless Black Lives Matter.

The shocking move was jumpstarted by the Milwaukee Bucks, who were scheduled for an afternoon tipoff in Orlando but never showed up on the court. Instead, their opponent — the Orlando Magic — warmed up per usual while Milwaukee remained in the locker room. When it became clear the Bucks weren’t arriving, the Magic players walked off and the game was postponed. It shocked referees and broadcasters on NBATV, who were all preparing for that Game 5.

Within an hour, all of Thursday game’s were postponed, including the Rockets vs. Thunder and Blazers vs. Lakers. All of the WNBA’s Wednesday games were also canceled, as well, as players stood in solidarity with others boycotting games.

“F– THIS MAN!!!! WE DEMAND CHANGE. SICK OF IT,” LeBron James tweeted Wednesday.

It was the boldest message yet from an NBA team as the league tries to juggle its objective of promoting the Black Lives Matter movement while broadcasting the playoffs. But the next step will be even more important: With three rounds of playoffs remaining, will the players leave the bubble entirely? Or will their boycott be brief enough as to not disrupt the completion of a postseason and crowning a champion? Canceling the bubble would cause significant financial harm to the league and players as they rev up another CBA negotiation this offseason. Continuing the bubble would lessen the impact of a protest. Players were reportedly meeting in Orlando Wednesday night to discuss their options.[More Sports] The NBA must prove it cares about Black lives, not Black genes »

Even before Milwaukee protested the game, members of the Raptors and Celtics were discussing boycotting their matchup Thursday in Game 1 of the Eastern Conference semifinals. Their thinking, as outlined by Celtics All-Star Jayson Tatum, is that attempts at messaging and raising awareness clearly haven’t solved any problems, so more drastic measures must be considered.

“People are going to say sitting out, what is that going to do?” Tatum said. “Obviously if we sit out a game or the rest of the playoffs, we understand how big of an impact that would have. Everyone is going to have to talk about it … we don’t want to just keep playing and forget about what is happening on the outside world.”

It was fitting that the Bucks, who own the NBA’s best record, set off the protest. They play in the same state — Wisconsin — where Jacob Blake was shot in the latest example of police brutality aimed at an unarmed Black man.

“Some things are bigger than basketball,” Alex Lasry, who is the Senior Vice President of the Bucks, tweeted. “The stand taken today by the players and org shows that we’re fed up. Enough is enough. Change needs to happen. I’m incredibly proud of our guys and we stand 100% behind our players ready to assist and bring about real change.”[More Sports] The NBA must prove it cares about Black lives, not Black genes »

It’s easy to understand the players’ frustrations. They’ve been stuck inside a bubble for over a month, often drawing attention to the Breonna Taylor case but failing to gain traction. The police officers who shot Taylor remain largely undisciplined, and the outrage over George Floyd’s killing was still simmering when Blake was shot Sunday by cops in Kenosha, Wis.

As long as they play the games, fans are entertained and owners can recoup some of the money lost because of the pandemic.

On the other hand, it’s hard to imagine how much change can be inspired by not playing. Kyrie Irving, for instance, pushed for players to skip the bubble because, among other reasons, it would detract from the movement against social injustice. Irving stayed home along with several other players — including Kevin Durant, Avery Bradley and Bradley Beal — but any impact they might be having on the movement has been hidden compared to the players in the Orlando spotlight.

Would skipping a game promote police reform or prompt justice for Breonna Taylor? The Bucks and their NBA brethren are willing to find out.