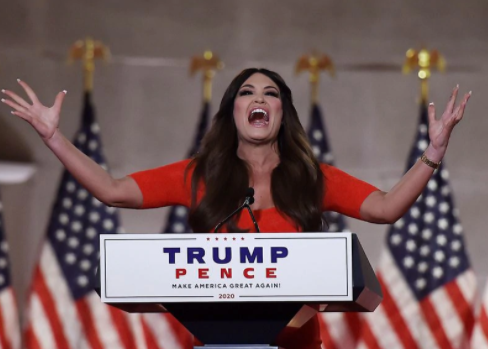 Kimberly Guilfoyle’s combative speech at Monday’s Republican National Convention was so loud that her relatives in Ireland heard it. It seems the high octave rant was received pretty similarly on both sides of The Pond.

The Irish Independent said it reached out to the 51-year-old former Fox News host’s uncle James Guilfoyle in the Clare County town of Ennis, who didn’t want to comment. But one of Guilfoyle’s cousins agreed to speak anonymously.

Though that cousin hadn’t seen her speech live, the unidentified relative had just spoken to another family member who did.

“He said she was roaring and shouting about Trump,” the cousin laughed. “He was saying ’ Did you hear that lunatic on the telly?‘”

Guilfoyle, who dates Donald Trump Jr., studied law at Trinity College and is part-Irish. Her father is also from the western town of Ennis. According to Irish Central, she spent summers there as a child working at the family gift shop. Guilfoyle wished her Uncle James a happy retirement on her show “The Five” in 2016 when he stepped down from a print shop the family also ran.

In her Monday screed from North Carolina, Guilfoyle bizarrely claimed her mom was an immigrant from Puerto Rico, which is part of the U.S. She also shouted that her political opponents would “destroy this country” steal people’s “liberty” and “freedom” and control what “you see and think.”AOC reminds ‘proud Latina’ Kim Guilfoyle that citizens of Puerto Rico are U.S. citizens »

Guilfoyle’s cousin said they’d been informed his Trump campaign-advising kin was quite spirited during her performance.

“I’m going to watch it now,” that cousin said. “It’s all a bit ridiculous, the whole thing.”

“This quote from Kimberly Guilfoyle’s cousin in Clare after her bizarre speech is proof that no matter how important your job is or who your (boyfriend) is, your Irish relatives will knock the notions out of you,” tweeted Lucy O’Shea.

Irish media keeps a close eye on U.S. politics, though the people of the Emerald Isle aren’t always impressed these days.

Famed Irish Times columnist Fintan O’Toole wrote in April that leadership in the U.S. has changed the way the Irish people see the nation.

“Over more than two centuries, the United States has stirred a very wide range of feelings in the rest of the world: love and hatred, fear and hope, envy and contempt, awe and anger,” he wrote. “But there is one emotion that has never been directed towards the US until now: pity.”