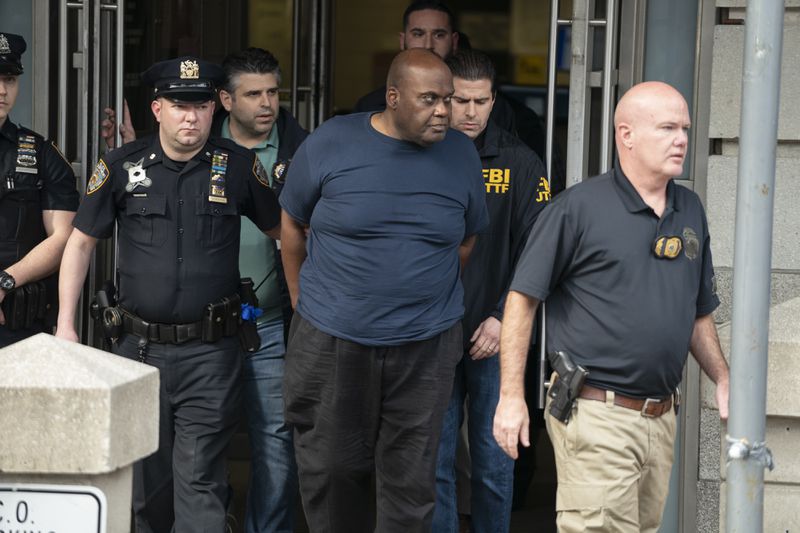 The fugitive suspect wanted for the shooting spree inside a jam-packed Brooklyn subway car was arrested Wednesday on an East Village street, ending a massive manhunt for the gunman who blasted 10 innocent straphangers just one day earlier, the NYPD announced.

Frank James was taken into custody without incident on a federal warrant for committing a terrorist act on mass transit. He faces a Thursday hearing in Brooklyn Federal Court for the terrifying attack aboard a train filled with rush hour commuters.

The 61-year-old suspect was busted for the Tuesday assault after he called the NYPD’s CrimeStoppers hotline, a police source said. In the call, James stated that he was in the East Village, and that he was “seeing his face all over the news,” said the source.

An operator asked James for his callback number — and he replied that he didn’t know it, because his phone was new, and that in any case its battery was about to die. James told the operator he’d be charging the phone at a McDonald’s or somewhere else nearby, the source said.

Ninth Precinct officers were soon looking for him.

Hailed as the hero of the day was security camera company worker Zack Dahhan, 21, of Union City, N.J., whose quick actions and keen eye landed James in custody near the McDonald’s on First Ave. at E. 6th St.

“At first I was so scared,” Dahhan almost shouted afterward, still amped up from the encounter. “I saw him walking on the street. I thought ‘This is the guy!’ I’d seen his picture. I saw the car, the police coming, and I said ‘This is the guy!’”

Dahhan, who grew up in Syria, flagged down the police car. The suspect was quickly apprehended and led away in handcuffs, wearing a blue shirt and sweatpants as the city breathed a collective sigh of relief.

James faces a sentence of life imprisonment if convicted in the subterranean attack where he donned a gas mask, set off a smoke bomb and opened fire with a two-word warning: “Start running.”

“My fellow New Yorkers, we got him,” said Mayor Adams. “We want to protect the people of this city and protect those who believe they can bring terror to everyday New Yorkers. Thirty-three shots, but less than 30 hours later we’re able to say we got him.”

The arrest came shortly after the NYPD released new images of the suspected subway shooter as the citywide search continued.

Smartphones around the city blared with alerts urging New Yorkers to contact authorities with any information about the suspect, and police made good on Adams’ vow that he would be put in handcuffs.

“We used every resource at our disposal to gather and process significant evidence that directly links Mr. James to the shooting,” said NYPD Commissioner Keechant Sewell. “We were able to shrink his world quickly. There was nowhere left for him to run.”

James disappeared Tuesday after firing nearly three dozen bullets inside a northbound N train, with 10 riders shot and 13 more injured around 8:30 a.m. as the subway rolled beneath Brooklyn.

Just witnessed the subway shooter Frank James being arrested in the middle of the East Village…crazy…. pic.twitter.com/g5CJsUpUSF

A 10-page federal court filing alleged the gunman left behind a bag that contained “black powder-filled explosives” inside the train, and that he tried to scratch away the serial number on the legally purchased 9-mm. Glock 17 weapon used in the assault.

“James is accused of using a weapon to attempt to kill dozens of people,” wrote FBI agent Jorge Alvarez in a federal complaint, nothing that authorities also executed a search warrant on his Philadelphia storage unit.

He drove a U-Haul van over over the Verrazzano Bridge into Brooklyn around 4 a.m. the morning of the attack, surveillance images show.

At around 6:10 a.m., the court papers say, James got out of the U-Haul at W. Seventh St. and Kings Highway wearing a yellow hardhat, an orange working jacket with reflective tape. He had a backpack in his right hand and pulled a rolling bag with his left, prosecutors said.

He was two blocks away from a stop on the N line, the court papers said.

After the subway carnage, surveillance video caught James leaving the 25th St. station. He then rode a city bus to a subway station at Seventh Ave. and Ninth St. in Park Slope, where he arrived at 9:18 a.m., police said.

Authorities had offered a reward of up to $50,000 for info leading to the arrest and indictment of the suspect.

Later Wednesday, after his arrest, James was led out of the 9th Precinct. James answered no reporters’ questions as he shuffled to a waiting cop car, then appeared to grimace as he awkwardly tried to get in with his hands cuffed behind his back.

“There was a clear desire to create terror,” said Adams during a morning appearance on WNYC. “When you bring a smoke bomb, when you bring an automatic weapon, wear a gas mask, in a very methodical way injure and attempt to harm innocent New Yorkers — that is terror. We’re going to call it as we see it.”

The motive behind the shooting spree remained unclear. A police source said it was a miracle that no one was killed, and investigators recovered 33 9-mm. shell casings from inside the subway car.

NYU Langone Hospital-Brooklyn treated 21 of the train victims for smoke inhalation and gunshot wounds, with 16 released by Wednesday morning and the remaining five listed in stable condition. Two of the shooting victims were still at Maimonides Hospital, where three other straphangers had been treated and released.

Authorities believe the shooter acted alone when he went on the bloody rampage that sent terrified train riders sprinting for safety as smoke billowed from the subway car.

James has a criminal record in Pennsylvania, New Jersey and Wisconsin, and he had nine prior New York arrests between 1992-98, four for possession of burglar’s tools, said police sources.

For days before the attack, he lived inside the rented U-Haul van on a Brooklyn street, said authorities. Cops recovered a portable heater, clothing and other items inside the vehicle with Arizona plates.

The suspect also left behind a collection of online ramblings, including a YouTube video titled “Sensible Violence.” In another video, the suspect says he was diagnosed with a mental illness and treated in the Bronx during the 1970s.

Catherine Garcia, 34, of Bay Ridge, who was on the train when the shooting started, cheered news of the arrest.

“I’m happy that he’s alive, that he didn’t kill himself like the cowards do when they do something like this,” she said. “I’m happy they caught him. I want him to know I went to work today. … He’s not going to take away my sense as a true New Yorker.”