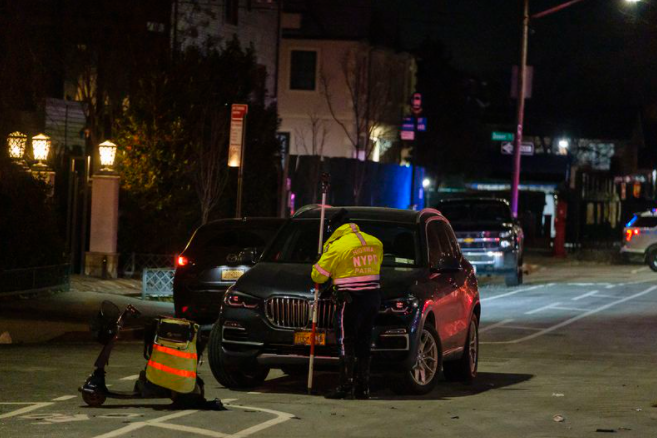 A prominent real estate developer was the driver who fatally struck a 99-year-old Holocaust survivor as he crossed a Brooklyn street in his wheelchair on his way to synagogue, police sources said Monday.

Pyotr Yadgarov, 52, drove his 2020 BMW X5 luxury SUV west along Oriental Boulevard in Manhattan Beach around 4:45 p.m. Saturday when he ran into Jack Mikulincer, who was crossing north on Coleridge St. next to his home as he made his way to a Sabbath service.

Yadgarov has not been charged. Police do not know how fast the car was moving when Mikulincer was killed, the sources said.

The license plate on the BMW shows the car has six tickets for speeding in school zones last year. The plate has 10 speed camera tickets and four for failing to stop at a red light since June 2016, public records show.

Yadgarov runs PYE Properties, a property development firm based in Coney Island that “acquires distressed, vacant properties and development sites with an upside in value,” according to the company’s website.

The developer lives in a mansion-style house on Ocean Ave. four blocks from where Mikulincer was killed. Yadgarov was not home Monday evening and his BMW was not in his driveway.

The intersection Mikulincer crossed when he was killed has no stoplight or crosswalk. Family and friends of the victim — a Hungarian native who survived Holocaust-era concentration camps — said he regularly crossed the street on his way to synagogue.

“Jack Mikulincer survived concentration camps during the Holocaust,” said John Berman, a member of the advocacy group Families for Safe Streets. “On Saturday, he could not survive simply trying to cross the street to get to his synagogue.”

Mikulincer’s late wife was also a victim of traffic violence, his daughter said Sunday. She had suffered injuries from a car crash 30 years ago on her way to a Chanukah celebration in Queens when the car she was a passenger in was T-boned, the couple’s daughter told reporters She died in 2011.

At least 24 people have been killed in crashes on city streets this year as of Sunday, up from 16 fatal crashes during the same period of 2020. That follows a troubling trend in 2021, which saw the highest number of fatal crashes in a calendar year since 2014, the first year former Mayor Bill de Blasio took office.