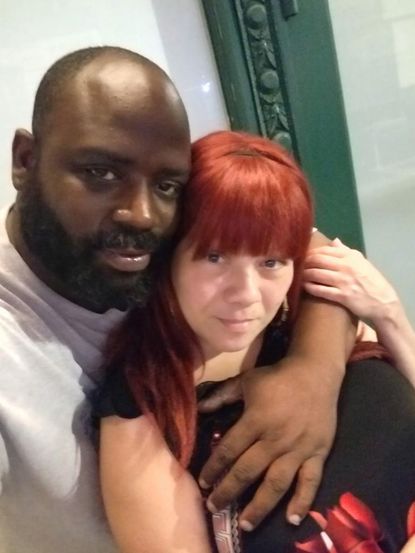 A Brooklyn man shot in the leg by his deranged roommate had to use his body to blockade his bedroom door, shielding himself and his girlfriend from the gunman — who blasted two cops responding to the violence.

Damon Lindsay recounted the harrowing ordeal in an exclusive interview as he recuperated at a local hospital. The cops, one struck in his bullet-resistant vest and the other grazed in the leg, were treated and released, police said Monday.

The roommate, Ridhwaan Abdur Rashid, who Lindsay, 45, considered a close friend, went berserk in their apartment on Hawthorne St, just across from Prospect Park in Prospect Lefferts Gardens, about 9:15 p.m. Sunday.

“He had never erupted like that before,” Lindsay marveled. “He just started getting loud in the last couple of days. I don’t know what it is that set him off. I would never in a million years have expected that from him. He was like a little brother to me.”

“We didn’t know what he was capable of,” LIndsay’s girlfriend, Phyllis Mitsiell said. “He was laughing, crying, chanting, saying ‘Forgive me!’ I was scared. I had never seen him behave in such a manner.”

“When I went to check on him he punched me in the face and I tried to hold him to calm him down,” Lindsay said.

Lindsay eventually retreated to his bedroom to check on Mitsiell, 46.

“I turned around to see what was going on with (Abdur Rashid) and I saw a revolver in his hand,” Lindsay said. “I said, ‘What are you doing? What’s wrong with you?’ I ran back in my room and that’s when I realized I had been shot.”

The round hit Lindsay in one leg.

Lindsay and Abdur Rashid met years ago at the building where they both work as security guards and fire and life safety directors. They became fast friends and would watch sports, barbecue meat, boil seafood, drink beer and hang out together. They became roommates about 18 months ago.

Lindsay and Mitsiell hid in a closet, where both called 911, begging dispatchers to send the police right away.

Just outside their door, they could hear Abdur Rashid screaming and were afraid he would burst in.

“I laid down in front of the door to barricade it so he couldn’t push his way in and I stayed there,” said Lindsay, who has taken an active shooter course.

Abdur Rashid tried pushing in the door and turned the knob several times. “I was thinking I’m going to die,” Rashid said.

Mitsiell put a mattress and box spring against the door and tied a T-shirt around her boyfriend’s leg as a tourniquet.

She also tried to flag down cops.

“I tied a white curtain to a broomstick and waved it out the window,” she said. “I was nervous they wouldn’t know what room to go to.” She eventually tossed keys to cops outside so they could gain access to the apartment.

Lindsay and Mitsiell heard the barrage of gunfire between Abdur Rashid and cops, then silence.

“I was petrified. I was bleeding,” Lindsay said. “My heart rate was accelerated. I just wanted to get to the hospital.”

Mitsiell, who suffers from a heart condition and diabetes, was taken to Kings County Hospital where she got insulin because her prescription was still in the apartment. Medics took Lindsay went to Brookdale University Hospital, where he was recovering Monday.

“I pray that he defeats that demon, or whatever monsters are troubling him, that caused him to do what he’s done,” Lindsay said of his friend. “I’m just grateful to be alive. It’s in the hands of the police now.”

Abdur Rashid was hit with a slew of charges Monday including attempted murder of a police officer , weapon possession and unlawful imprisonment.