3 Ohio brothers die after getting stuck in manure pit 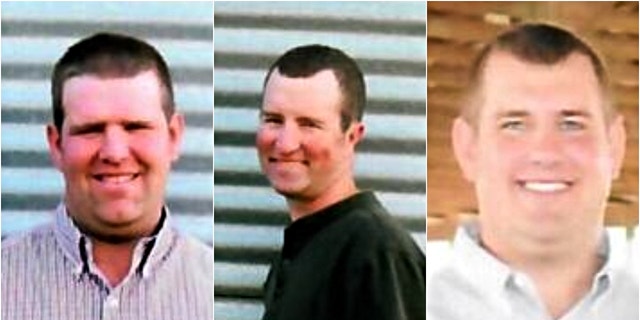 Three Ohio brothers, all in their 30s, have died after getting stuck in a manure pit on their farm, according to authorities.

Gary Wuebker, 37; Brad Wuebker, 35, and Todd Wuebker, 31, died Tuesday after being unable to escape from the manure pit and passing out from the fumes, St. Henry Fire Chief Matt Lefeld told The Associated Press.

They were fixing a manure pump when they found themselves unable to get out of the pit, Lefeld said.

A Mass for the three brothers will be held on Monday, according to N. J. Hogekamp Sons, Inc., funeral home in St. Henry.

The Wuebker brothers were members of St. Aloysius Catholic Church and the Coldwater Young Farmers. The siblings worked alongside each other and their father at GBT Wuebker Farms, LLC.

A number of local farmers expressed condolences for the Wuebker family on social media after news of the tragedy.

“Our hearts are with the Wuebker Family,” wrote Mercer Landmark, Inc., a local farm. “Brad, Gary and Todd Wuebker lost their lives doing what they loved – working on the family farm. Brad and Gary were members of our team and had a work ethic like no other.”

The Ohio Holstein Association said in a Wednesday Facebook post that the group’s “condolences go out to the Wuebker family on the loss of their three sons, Brad, Todd, and Gary Wuebker of Mercer County.”

Manure pits are common on large livestock farms and are used to store waste before it is used as fertilizer on fields. But the pits can produce dangerous gases including hydrogen sulfide, methane, carbon monoxide and ammonia.

Some of those gases can lead to headaches, dizziness, breathing trouble and deaths, according to the Ohio State University Extension.