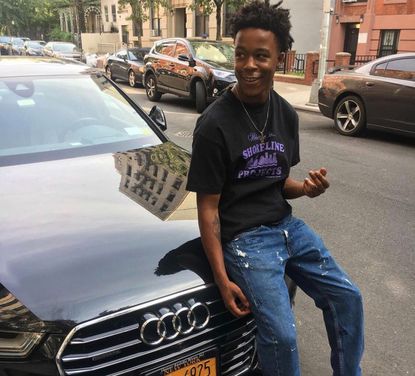 A teen graffiti vandal shot by NYPD cops after he opened fire on them was charged with attempted murder Monday, authorities said.

Messiah Nantwi, 18, allegedly fired three shots after cops confronted him and an accomplice for spraying graffiti on a wall on Elton Ave. near E. 153rd St. in the Bronx early Sunday.

The accomplice got away but police managed to catch Nantwi, who tussled with the arresting officer and pulled out a gun, letting off three shots, according to authorities.

The three cops, all in uniform, returned fire, blowing the teen’s .22-caliber handgun in half as they blasted it out of his hands. Nantwi was struck a number of times and is in critical but stable condition at Lincoln Hospital.

He was charged with the attempted murder of a police officer and gun possession.

Patterson Nantwi, the father of the shot teen, said Monday his son has already been through multiple surgeries since being shot but remains unconscious on a respirator. He says his son was struck by 12 bullets.