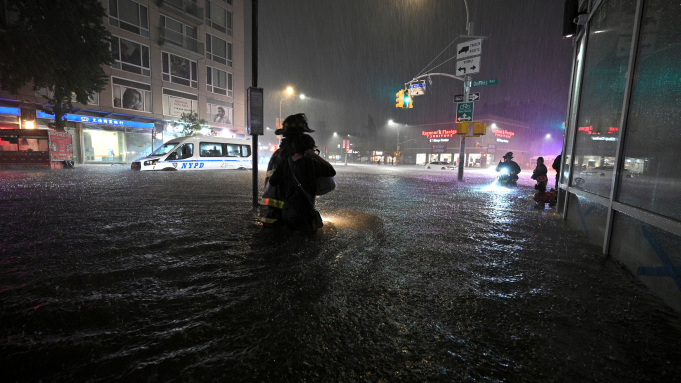 At least nine New Yorkers, including a 2-year-old boy and an 86-year-old woman, were killed as fast-moving rains from the remnants of Tropical Storm Ida pounded the city, sparking catastrophic flooding, police said Thursday.

All but one of the victims were in basement apartments when they were trapped by rising flood waters between 10 p.m. and midnight Wednesday, authorities said.

The youngest was a 2-year-old boy found dead inside a home on 64th St. near Laurel Hill Blvd. in Woodside, Queens, about 10 p.m. The child’s 50-year-old dad and 48-year-old mom also died in the flooded basement pad.

The water got so high it flooded the first-floor apartment above where Deborah Torres lives with her 14-year-old daughter. The two were in pajamas about to go to sleep when water started to trickle in.

“It was so fast,” Torres, 38, told the Daily News. “My daughter started to scream, ‘Mommy! Mommy! The water’s coming up!’ And when I came out from my room the water was already on my feet. And we didn’t have time, the water started to come, come, come.”

Torres’ apartment was underwater within eight minutes, she said.

“My sofa was floating. This never happened before,” she said. “I wasn’t paying attention to my things — I was so worried about the family downstairs.”

The owner of the building, who lives on the third floor, received a desperate call for help from the doomed family in the basement apartment, Torres said.

With the flood waters rising to her knees on the first floor, Torres feared the worst for the family below.

“I think the pressure of the water was too strong that they couldn’t open the door either side,” she recalled. “The (basement) was just like a pool with stairs.”

Samsul Chowdhury, a landlord who lives down the street from Torres, ordered his basement tenants into his apartment when the flood waters began to rise.

“They didn’t want to come up, I told them, ‘Just close the door and come,’” said Chowdhury, 62. “They slept in my apartment upstairs.”

“It shouldn’t happen here in Queens,” he said. “They say we’re the best city in the world, but what happened?”

Meanwhile, the 86-year-old woman was found dead by her son just before midnight in her basement apartment on 84th St. near 55th Road in Elmhurst, cops said.

About 10:45 p.m., police responding to flooding inside a home on Grand Central Parkway near 62nd Drive in Corona found an unconscious 48-year-old woman inside a water-filled apartment, officials said. EMS took the woman to Forest Hills Hospital, where she died.

At 11:15 p.m., first responders found a 43-year-old woman and her 22-year-old son unconscious in a flooded basement apartment on 183rd St. near 90th Ave. in Hollis. The man died at the scene, cops said. EMS rushed his mother to Queens Hospital but she could not be saved.

Their home is located in a dangerous flood zone city officials have been aware of for decades.

The woman’s husband and another son survived, according to neighbor Ragenbra Shivprafab, who said he warned the family to get out before it was too late.

“They were packing up their stuff to bring out,” he added. “I told them that is not important. Leave the stuff. Then she and her son died.”

NYPD divers had to be called in to retrieve the two victims.

About 15 minutes later in Brooklyn, a 66-year-old man was found dead in his basement apartment on Ridgewood Ave. near Autumn Ave. in East New York.

And in Queens on the Grand Central Parkway near LaGuardia Airport, police found a charred body in a car that had been rear-ended — a death they believe was flood-related.

Autopsies have been slated to determine exactly how each victim died. Their names were not immediately released.

The storm dumped 3 to 5 inches of rain on the city an hour, the National Weather Service reported Wednesday night. Mayor de Blasio declared a state of emergency at 11:26 p.m.

“Stay off the streets tonight,” he warned. “If you’re thinking of going outside, don’t.”

By 9 a.m. Thursday, 36,498 homes in New York State remained without power, according to the website poweroutage.us. An additional 76,817 New Jersey and Connecticut were also without power.

The National Weather Service recorded 3.15 inches of rain in Central Park in one hour Wednesday night, far surpassing the 1.94 inches that fell in one hour during Tropical Storm Henri on Aug. 21, which at the time was the heaviest rainfall ever recorded in the city.

The weather was so severe the National Weather Services declared an unprecedented flash flood emergency until 11:30 p.m. for most of the city and Westchester County south of White Plains.

The FDR Drive in Manhattan and the Bronx River Parkway were under water by late Wednesday.

Throughout the night, social media was flooded with images of walls of water cascading down on city train stations. Officials said there were evacuations of at least 17 subway trains stuck between stations at the height of the deluge. Subway stations and tracks became so flooded that the Metropolitan Transportation Authority suspended all service.

A tornado watch was also issued for New York, New Jersey and Connecticut until 1 a.m.

Tropical Storm Ida hit the U.S. on Sunday, thrashing the Gulf Coast with rain and high winds. Two people were killed and millions were left without power when it made landfall in Louisiana, officials said.

The National Weather Service said Thursday that, while the weather is expected to be dry and mild, residual flooding will continue in some areas until Friday.