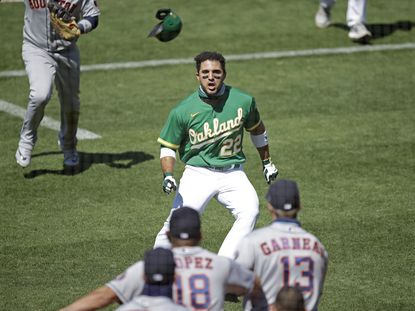 Oakland outfielder Ramon Laureano is expressing regret over his involvement in the ugly scene.

“I regret charging [Astros hitting coach Alex Cintron] because he’s a loser,” Laureano told ESPN. “[A suspension] is understandable, but I hope it’s not that many games.”

MLB is expected to hand down harsh penalties to Laureano and Cintron as base-brawling during a pandemic doesn’t exactly conform to social-distancing protocols.

The A’s outfielder, who had been hit twice by Astros rookies Humberto Castellanos during the series at Oakland Coliseum, accused the Astros coach of directing vulgar language about his mother his way from the dugout after he got pegged the second time and then mimicked how to properly pitch on his way to first base.

Laureano said it was Cintron’s insult in Spanish that set him off.

“Every day I wake up with the motivation to be with them,” Laureano said of his parents, who sent him to the U.S. from Dominican Republic as a teenager. “They sacrificed their life for me. They made the tough decision to let their own kid go to the States by himself and follow his own dreams. I’ve been away from my family for 10 years. It’s tough to be away from them. Any chance I have to be with them, I feel like I’m in heaven. So for him to say that to me about my mom, it doesn’t sit well. I’ve got a fire inside me right away in that second.”

Cintron denied he said anything about Laureano’s mother, but declined to say what he did chirp from the Astros dugout.

Laureano never actually reached Cintron when he charged toward the coach. Astros catcher Dustin Garneau intercepted him and pulled him to the ground to stop him from doing something he would further regret.

“[Garneau] was protecting me 100% the whole time,” Laureano said.

Laureano was drafted by the Astros in 2014 and was with their organization until 2017 when he was traded to the A’s. He made his MLB debut with the A’s in 2018.

Both benches cleared leading to a scuffle involving 40+ people on the field.

The A’s swept the series when they beat the Astros 7-2 on Sunday. Laureano said he’s already gotten over the exchange.

If he is issued even any kind of suspension, he’ll join Dodgers pitcher Joe Kelly (8 games) in serving suspensions after getting into it with the Astros this season — which would still be more games than any of the Astros served for their part in the sign-stealing scandal.