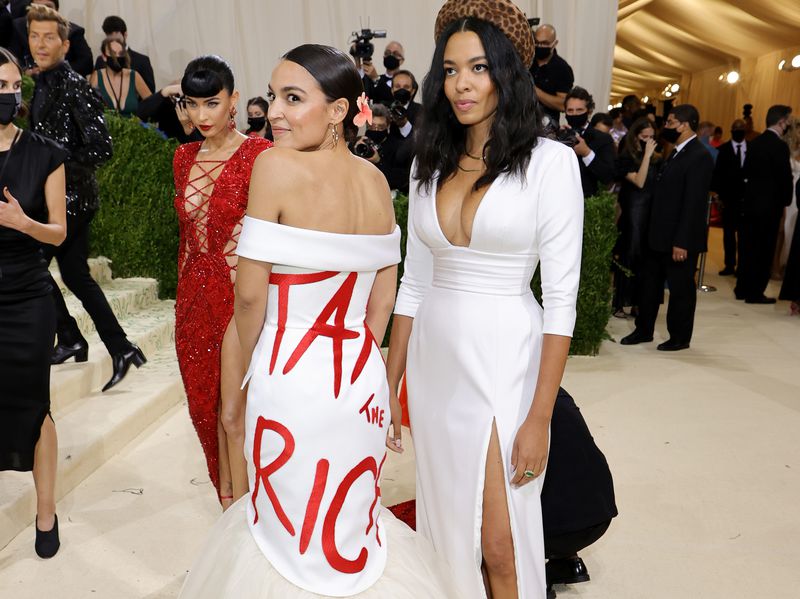 The tickets go for $35,000 a head. A table can cost more than $200,000. The room is crammed with some of the world’s wealthiest celebrities, donning thousand-dollar gowns and suits, at an event meant to celebrate, in many ways, excess itself.

Here, at the infamous annual Met Gala, is where New York City Rep. Alexandria Ocasio-Cortez chose to make a political statement, using her own ticket and custom designer dress, to do it: “Tax the Rich,” her Aurora James-designed Brother Vellies gown read.

“The time is now for child care, health care, and climate action for all. Tax the Rich,” read her accompanying Instagram post.

Except, well-intentioned as that may have been, it’s as of yet unclear whether people will actually be talking about taxes, child care, health care or climate as a result of Ocasio-Cortez’s stunt. So far, they are talking only about the stunt itself, and whether it’s hypocritical coming from the Congresswoman.

“AOC is slammed as a hypocrite for donning a custom Aurora James dress with ‘tax the rich,’” read the Daily Mail headline.

Ocasio-Cortez has positioned herself as a voice for the little people — the underserved and underrepresented. Because of that — along with some sexism and a lot of rank partisanship — she’s regularly called out for her “hypocrisy,” and behavior more befitting of big wigs than little people.

There was her $300 haircut, and the predictable hullabaloo that followed. There was the time she allegedly illegally parked her Tesla behind a D.C. Whole Foods, and the ensuing scandal. And the coverage of her hefty Uber, Lyft and airplane bills, despite sponsoring the Green New Deal and pushing to end our use of fossil fuels.

She’s blamed this scrutiny on the “ravenous hysteria” of her detractors, and she has a point. When she posted an incredibly moving account of her experience during the January insurrection, wondering aloud if she’d live to become a mother, and admitting she’d previously been the victim of sexual assault, her mouth-breathing Republican critics mocked, dismissed and discredited her.

But there’s also a bit of inconvenient truth, as it were, to the notion that public officials should be held to their own standards and practice their principles and intellectual consistency. That has little to do with haircuts and parking spots, but a lot to do with the intersection of a politician’s prescribed policies and personal life choices.

That’s where some of her critics get it wrong on her latest run-in with the hypocrisy hawks. Wearing a dress that says “tax the rich” to a gathering of wealthy individuals isn’t hypocritical. If anything it’s pretty daring.

Ocasio-Cortez explained that she intended the message explicitly for the people in that room, “because when we talk about supporting working families and when we talk about having a fair tax code, oftentimes those conversations are happening among working and middle-class people.”

While that’s not hypocrisy, Ocasio-Cortez’s Met Gala stunt is definitely the victim of some confused mixed messages, however.

If exposing the scourge of economic inequality at a ritzy event like the Met Gala was the idea, she certainly indulged in all the benefits of being a rich person that night, from her chauffeured ride, her use of the swanky Carlyle Hotel to get ready, her celebrity hair and makeup artists, her custom gown and $450 earrings, and rubbing elbows with the likes of Kendall Jenner, Anna Wintour and wealthy celebs.

The designer she chose to wear and promote, Brother Vellies, sells shoes for upwards of $700 a pair, bags for $1500, a $95 comb and $35 coffee. They’re beautiful luxury goods that are presumably supported by rich people who can afford them — the rich people Ocasio-Cortez and the brand’s designer are targeting with the anti-rich message. So, does the brand want more customers…or scalps?

Would it have been more meaningful to rebuff the glitzy event and the rich attendees in protest of economic inequality? Or show up in inexpensive clothes and dressed like a public servant, instead of a Hollywood star? Or donate what would have been the cost of her designer gown, accessories, travel and accommodations to an organization that combats income inequality?

I don’t begrudge Ocasio-Cortez’s attempt at using her platform to spread awareness about issues that matter to her, nor do I think her attending a glitzy event necessarily makes her a hypocrite. And I hope Brother Vellies’ sales skyrocket as a result of her promotion (and the rich folks she wants to tax).