After another Yankee postseason failure, time for Hal Steinbrenner to demand answers 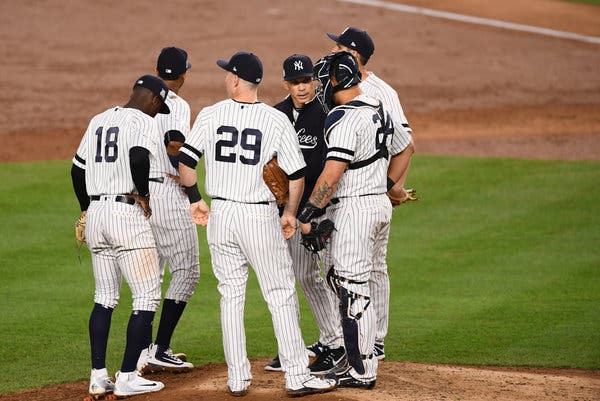 You start here with the Yankees, about whom Hal Steinbrenner would probably like a word now:

They have now lost with the team they were sure they could finally win with, 11 years from their last World Series, after one World Series title in the last two decades. They had Gerrit Cole, on whom they had lavished a $324 million contract, the richest in history, to start the game. They had their closer, Aroldis Chapman, on whom they have lavished the richest closer contract in history, on the mound in a tie game in the bottom of the 8th. And they lost to a team from Tampa that, compared to them, at least payroll-wise, is a Mom and Pop operation.

The Yankees sure do have Cole. They have the rest of another $300 million contract, the one belonging to Giancarlo Stanton, on the books nearly to the end of this decade. And not only do they lose an elimination game this October the way they did last October — Chapman giving up a season-ending home run to Jose Altuve that time — they do it one round earlier. They back up. They lose another big October series for the same reason they lost the last two games of the American League Championship Series to the Astros three years ago, when there was that baseball rising in the Bronx and they seemed to have become the Yankees again:

When they stopped hitting home runs, they lost.

Finally, at the very end, they watched Mike Brosseau, at whose head Chapman threw a 100 mph fastball on Sept. 1, turn into Tampa Bay’s Bucky Dent in San Diego. You know that they say about karma. It’s, well, rich sometimes. Maybe Chapman should have buzzed Brosseau again on Friday night.

They got Cole, they got a new pitching coach, they got a new training staff, they essentially got Stanton back in the playoffs, and saw Stanton, for a couple of weeks, go on one of the great home run tears in Yankee history. They still lost to the Rays, for the 11th time in 15 games this season. So, yeah, the owner of the team has a right to ask some questions this time, about an organization whose mission statement, every year, is World Series or bust. Only the reality is this: The only reason the Yankees got to the second round this time is because baseball added a round.

“There’s a lot of pain in that room,” Aaron Boone said when it was over, a good man still defending what was clearly an organization decision to pitch the kid, Deivi Garcia, for one inning in Game 2 and then replace him with J.A. Happ.

“We’ve had a lot of success,” Boone continued, “but some heartbreaking playoff losses.”

He can say that again. The Yankees sure did hit a lot of home runs the past couple of weeks. Stanton hit them and Judge hit three, even if he didn’t do much else, and Luke Voit kept hitting them. But you saw what happened when they stopped. They struck out 18 times as a team in Game 2. They struck out 12 more times on Friday night. They got one run in Game 5. They got a total of one run against the Astros in Games 6 and 7 three years ago. It’s big fun to watch all the big flies. The Yankees won 100 games twice, in 2018 and ’19, hitting so many balls out of sight you lost count. They’re still one of the best teams in baseball. Just not the best, and not for a long time.

And when it was all on the line, even with the home run flurry that finally stopped against the Rays, the Yankees — and stop me if you’ve heard this one before — didn’t have enough pitching, as well as everybody pitched in Game 5 until Chapman. Ultimately they were trying to get back to the World Series with four pitchers: Cole, Chapman, Chad Green, Zack Britton.

They can blame this on the same every-day division series schedule that everybody else played. They can blame this on injuries if they want. And, yeah, they lost Luis Severino, who had a big year for them two years ago, but who was also the starting pitcher in Game 3 against the Red Sox that year, in a game that ended up 16-1 for Boston. And they lost Tommy Kahnle, a relief pitcher who is suddenly discussed in the Yankee noise machine like the second coming of Goose Gossage. You know who the Astros lost this season from their pitching staff? Justin Verlander and their closer, Roberto Osuna. And they are still playing.

The Yankees also had a very expensive starter, Happ, they were afraid to start against the Rays, and a very expensive set-up man, Adam Ottavino, brought to the Bronx with tremendous fanfare, they were afraid to let out of the bullpen. But the showpiece of the Yankees bullpen is Chapman, who has now reminded you, two years running, of the guy who nearly lost the ’16 World Series for the Cubs when he served up a 2-run shot to Rajai Davis when the Cubs were four outs away from winning their first World Series in 108 years.

The Yankees have only gone 11. You know it seems like so much more on 161st Street. Hal Steinbrenner talked about multiple World Series wins for the Yankees when he spent the money on Cole. Maybe that big run of Series will start next year. For now the Yankees go home early again. And if Hal Steinbrenner doesn’t want a word about where they’re really going, then when does he?

THE GREATNESS OF WHITEY, HEAVYWEIGHT BATTLE ON THE RED CLAY & THE ASTROS BACK IN THE ALCS …

We didn’t see a lot of the great Whitey Ford at Yankee Stadium the older he got.

And even though he was properly known as the Chairman of the Board, he never seemed to get the embrace from Yankee Nation that Mickey got, or Yogi, or Mr. DiMaggio.

But he was the greatest starting pitcher in the history of the team, and he was one of the great Yankees in October, which is where they still keep score, even as long as it’s been since they were in a World Series.

But Whitey was more than that, as much of a gent as anyone who ever wore pinstripes, as much a face of old-Yankee grace as any of them he played with in the ’50s and ’60s.

And, like Lou Gehrig, he was the Yankee immortal who came from the city in which he did things on the most famous ballfield of them all that will always be remembered.

You know who the Jets need to run their football operation?

The Lakers needed one stop on Friday night against Jimmy Butler to win an NBA championship.

Now on Sunday night we will find out just how much trouble they made for themselves.

Rafa Nadal vs. Novak Djokovic, in the final of another French Open on Sunday, feels like the first real heavyweight championship fight in tennis since it was Djokovic against Roger Federer in that unforgettable Wimbledon final of 2019.

Federer is still sitting on 20 majors.

Nadal ties him if he beat Djoker at Roland Garros, and wins his 13th — what? — French Open title in the process.

But if Djokovic gets him, the standings, incredibly, will read this way:

If you have never read Ian Rankin’s John Rebus novels, now is as good a time to start as any, because Rankin’s new one — with the wonderful title “A Song for the Dark Times” — is the best he has ever written.

They are tough enough and talented enough to have made it back to the American League Championship Series for the fourth year in a row, even after an under-.500 regular season.

They have done what they’ve done in the postseason so far without Justin Verlander, one of the great pitchers of his generation.

And just imagine the hand-wringing if he makes Augusta National look like a par-3 course at the Masters next month.

It sure is a good thing Dave Gettleman got rid of that Beckham guy.

Whatever happened to him, by the way?

When I switched back to baseball the other night, I expected Mike Pence to be interrupting the announcers.

We know the president went on that steroid regimen after testing positive for COVID-19, but here’s my question, just tracking his behavior since: