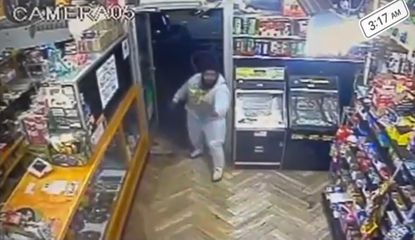 A Brooklyn mom out walking her pit bull was fatally shot, along with the dog, in a local smoke shop by a gunman investigators suspect was aiming for someone else, police said Monday.

Jennifer Ynoa, 36, was inside the store on DeKalb Ave. near Franklin Ave. in Bedford-Stuyvesant when the killer hopped out of a red car, threw open the door and started firing about 9:45 p.m. on Sunday, police said.

Video obtained shows the gunman standing in the doorframe shooting into the store. A customer who cops believe was likely the intended target and was standing behind Ynoa runs for cover toward the back of the store and was not struck.

Meanwhile a mortally wounded Ynoa and her shot dog stumble forward and out the front door after the shooter runs off, the video shows.

Ynoa and her pet pit bull, named Blue, collapsed onto each other on the sidewalk. Blue died at the scene while medics rushed Ynoa to Brooklyn Hospital Center, where she died.

The intended target fled the scene while the shooter got back in his car and took off. Cops are looking for both men.

Ynoa lived in NYCHA’s Lafayette Gardens complex across the street from where she was killed.

Her boyfriend, Carl Busch, 46, said she was the mother of four children, including three little ones.

“They’re inside sleeping,” Busch said hours after the shooting.

He described Ynoa as a strong woman and mother who kept to herself and avoided trouble and drama.

“She went to the store like she normally does and takes the dog for his late walk,” Busch said. “And then she comes back. That would be normally it. We sit there. She reads her books and stuff. She’s really just a simple homebody. She doesn’t bother anybody. She doesn’t hang out, she doesn’t carry on. She doesn’t do any of that. This is, this is crazy.”

Busch was in a nearby building when he heard the shots ring out.

“This is normal,” he said of the gunfire. “I didn’t think anything of it. I heard these shots and everything.”

Busch said Ynoa, who was born in Queens, was a health attendant in between jobs whose mother died recently.

“She’s a strong woman and she deserves better than that,” he said. “This is ridiculous. it’s awful. It’s hard, it’s hard.”

“I’m gonna miss her,” Brooks said. “She was a good close friend of mine. It’s bad. That’s crazy. She was an amazing mother.”

“Nice girl, very quiet,” said the neighbor, a woman who declined to give her name. “I saw her yesterday take her dog out. She [doesn’t] talk to nobody, say Hi — that’s it.”

Busch said he hopes cops catch the killer and bring him to justice.