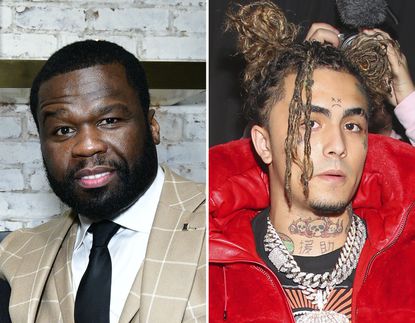 50 Cent may have backtracked on his Donald Trump endorsement, but now rapper Lil Pump is throwing his support behind a second Trump term.

The “Gucci Gang” singer, also known as Gazzy Garcia, shared an expletive-filled video with his 17 million Instagram followers Sunday making it clear that his bottom line is his top priority this election.

“All I gotta say is Trump 2020 b—h,” Lil Pump said in the video that’s no longer available.

It was last week that 50 Cent shocked many fans by endorsing Trump after previously telling James Cordon he turned down half a million dollars to attend Trump’s inauguration.

His comedian ex-girlfriend Chelsea Handler responded by saying she’d be happy to pay his taxes and restore him to the status of her “favorite” ex-boyfriend if he would “come to his senses.”

“Black lives matter. Thanks you, f—–! Remember?” she wrote on social media.

Fiddy, whose legal name is Curtis Jackson, seemed to get the message by Saturday, sharing his reversal with his 26 million Instagram followers.

“F— Donald Trump, i never liked him,” he posted.

Jackson told Cordon last year that he turned down six-figure inauguration invitation because he didn’t want to be used to try to “fix” Trump’s image with Black voters.

“I didn’t know if I could fix the damage. To be honest with you, all money’s not good money. You’ve got to be careful what you’re doing publicly,” he said. “I don’t know how you fix that.”