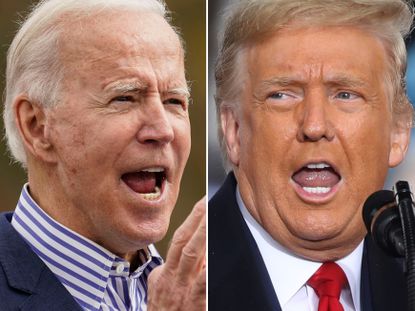 With just a week before Election Day, President Trump remains laser-focused on the Rust Belt while Joe Biden audaciously seeks to expand the Electoral College map.

After a day of three rallies in battleground Pennsylvania, Trump is set to hopscotch across Michigan and Wisconsin on Tuesday, two other states in the so-called #BlueWall that he famously flipped red in 2016.

The president is even stopping in Omaha, Nebraska, which allocates a single electoral vote to the winner of its congressional district.

Biden, on the other hand, is riding into traditionally Republican Georgia as he seeks to flip the script on Trump by snatching a must-win state out of the GOP column.

The two candidates’ travel plans offer an unmistakably stark contrast: Trump is trailing and he knows it, while Biden and the Democrats are playing offense.

With polls showing the president behind nationally and in all of the Rust Belt battleground states, Trump is pushing his #MAGA base to give him an encore performance of his shocking and narrow win of four years ago.

Biden is displaying confidence by heading to fast-changing Georgia where Trump won by 5% last time but polls show Democrats with a slender lead.

The former vice president plans to summon up the ghost of President Franklin Delano Roosevelt with a speech at Warm Springs, Georgia, a faded spa town where the father of the New Deal vacationed during the dark days of the Great Depression.

“It’s a loud signal and acknowledgment of Georgia as a battleground state,” said Nsé Ufot, chief executive officer of the New Georgia Project, which aims to increase voter registration, especially among young people and minorities.

With nearly 70 million votes already cast, Biden’s closing argument to America is to put an end to the tumultuous and divisive Trump era.

“This is our opportunity to leave the dark, angry politics of the past four years behind us,” Biden declares in a 60-second closing ad airing across battleground states.

Meanwhile, Sen. Kamala Harris (D-Cal.), Biden’s running mate, will campaign in Ohio. That choice is also significant because Trump carried it by a whopping 8% in 2016 and it has trended GOP in recent years.

Harris also plans to journey to Texas later this week, as some Democrats dare to dream about flipping the biggest red state prize of them all.

Trump will seek to get a bounce by celebrating the Senate confirmation of Amy Coney Barrett to the Supreme Court, giving conservatives a powerful 6-3 majority perhaps for years to come.

But the victory has been overshadowed by the continuing surge in coronavirus across the nation and particularly in the Midwest. Cases rose to a new daily record high last weekend and public health experts say 100,000 people a day could be infected in the coming days.

Biden has hammered Trump over his handling of the pandemic while the president insists the nation is “rounding the corner” and blames naysaying #FakeNews media for spreading pessimism.

It’s usually the presidential challenger who is scrambling to visit as many battleground states as possible in the closing days. But this time, the tables are turned on Trump as he seeks to pull off a second shocking comeback in four years, planning a dizzying 11 rallies in the final 48 hours before polls close on Nov. 3.