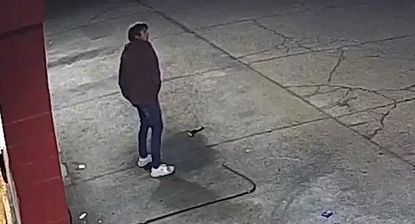 Five Oklahoma police officers will be charged with first-degree manslaughter in the killing of a 15-year-old burglary suspect who was shot more than a dozen times last November, authorities said Wednesday.

Stavian Rodriguez was accused of trying to rob an Oklahoma City convenience store at gunpoint on Nov. 23 when several cops surrounded him in a caught-on-tape confrontation.

Surveillance video obtained by local media appears to show the teen dropping a gun as officers repeatedly ordered him to get on the ground. He then raised his hands before lowering them again, a move that cost him his life.

Seconds later, he was shot at least 13 times in the head, chest, abdomen, hands and other parts of his body, according to an autopsy.

Following an investigation into the shooting, the Oklahoma County District Attorney’s office decided this week to file charges against five of the officers at the scene. They were identified as Corey Adams, Jared Barton, Brad Pemberton, Bethany Sears and John Skuta.

A sixth officer who was also there used a “less lethal” weapon and will not be charged, police said. All six cops had been on paid administrative leave, ABC affiliate KOCO reported.

Police said Stavian was locked inside the store when cops arrived at the scene and came out of with a gun in his hand, according to the station. He also did not follow orders and acted suspiciously, police said at the time.

The city’s police union posted a statement on Facebook defending the suspects.

“Officers must make life and death decisions in a split second, relying on their training,” said John George, president of the Oklahoma City Fraternal Order of Police.

“When an armed robbery suspect did not obey police commands, five officers perceived the same threat and simultaneously fired their weapons,” he said. “A loss of life is always a tragedy and we know these officers did not take firing their weapons lightly. The OKC FOP stands by these officers and maintains they acted within the law.”

Stavian’s family is suing the city over the boy’s death.