3 people, including mom and 10-year-old daughter, attacked on bus in Brooklyn; suspect under arrest 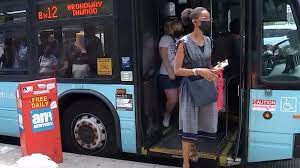 Three people, include a mother and her 10-year-old daughter, were assaulted on a bus in Brooklyn Friday morning, allegedly by a man who then fled and was captured a few blocks away.

Police said the suspect, Osiras Simon, 22, was sitting on the bus in Sunset Park around 7:50 a.m. and started attacking riders.

Simon first punched a 37-year-old woman in the face, police said, sending her phone to the ground. Simon then picked it up and smashed the device on the floor.

Next, he punched the girl in the face and punched and kicked her 40-year-old mother before fleeing from the bus.

The man was arrested nearby and has been charged with criminal mischief and assault.

The three victims were treated for injuries that are not considered life-threatening.

Simon previously threatened to hit a 44-year-old man with a brick in Baisley Pond Park in Queens in May. He was charged in that case with menacing.