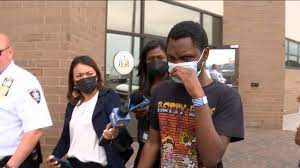 An 18-year-old man was arrested for allegedly making threats against fellow students and faculty members at a high school on Long Island.

According to detectives, he expressed his desire to conduct a violent act toward fellow Westbury High School students as well as faculty members.

School staff became aware of the threat and the school administration notified the police.

Blair Jr. is charged with making a terrorist threat and second-degree aggravated harassment.

A judge also granted an extreme risk protection order, which prevents the defendant from purchasing any firearms.