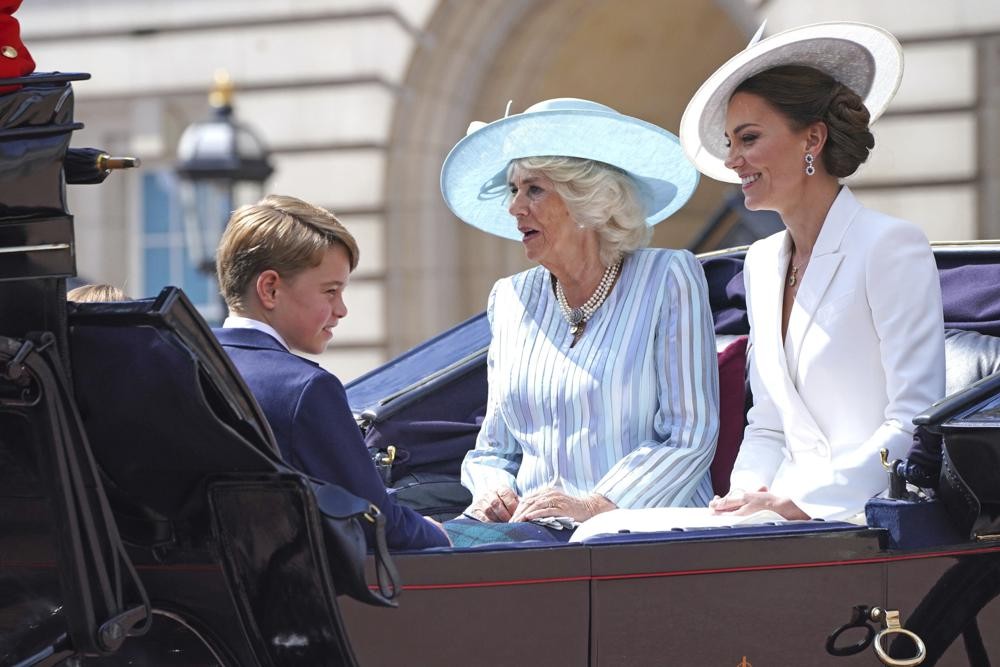 Four days of celebrations honoring Queen Elizabeth II’s 70 years on the throne got underway Thursday with a display of British military traditions stretching from the days of horse and cannon to the jet age.

Formal celebrations for the Platinum Jubilee began with Trooping the Color, an annual military review that has marked the sovereign’s official birthday since 1760. The queen took a salute on the balcony of Buckingham Palace and is expected to join the working members of her family again there at the end of the event, when 70 aircraft are set to roar overhead.

The jubilee is being commemorated with a four-day holiday weekend. The celebration of Elizabeth’s reign includes a service of thanksgiving Friday at St. Paul’s Cathedral in London, a concert at Buckingham Palace on Saturday and a pageant staged by thousands of performers drawn from schools and community groups around the country on Sunday afternoon.

Throughout the weekend, neighborhood organizations and individuals are expected to hold thousands of street parties around the country, repeating a tradition that began with the queen’s coronation in 1953.

The 96-year-old queen is Britain’s longest-reigning monarch and the first to reach the milestone of seven decades on the throne. The jubilee is giving many people – even those often indifferent to the monarchy – a chance to reflect on the state of the nation and the huge changes that have taken place during her reign.

Former Prime Minister John Major – one of the 14 prime ministers of the queen’s reign – said the monarch’s stoic presence had helped steer the country over the decades.

“The queen has represented our better selves for over 70 years,” he told the BBC.

In a written jubilee message, the queen thanked people in Britain and across the Commonwealth involved in organizing the celebrations. For many, the occasion is the first opportunity for a big bash since the start of the coronavirus pandemic more than two years ago.

“I know that many happy memories will be created at these festive occasions,” Elizabeth said.

“I continue to be inspired by the goodwill shown to me, and hope that the coming days will provide an opportunity to reflect on all that has been achieved during the last 70 years, as we look to the future with confidence and enthusiasm,” she said. 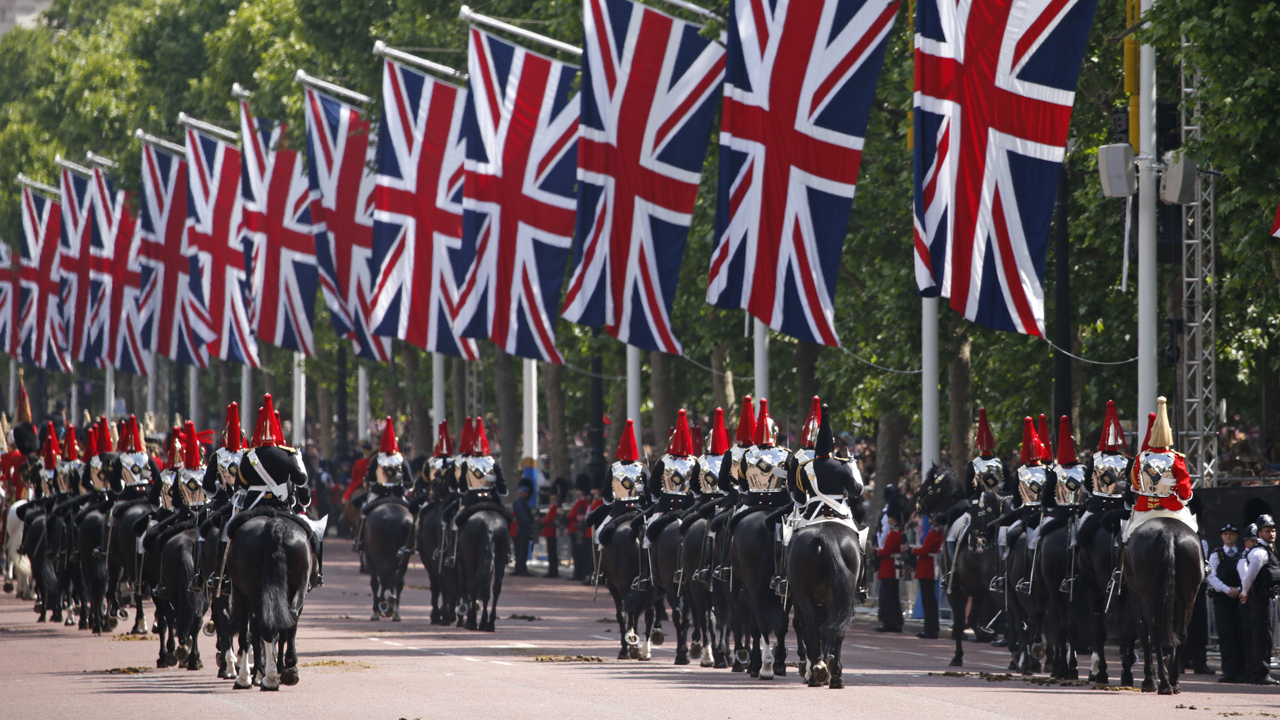 Cavalrymen ride their horses along The Mall during the Trooping the Color in London, Wednesday, June 2, 2022, on the first of 4 days of celebrations to mark the Platinum Jubilee.

Congratulations arrived from world leaders. French President Emmanuel Macron called Elizabeth “the golden thread that binds our two countries” and one of “very few constants” on the international stage.

Former U.S. President Barack Obama recalled the queen’s “grace and generosity” during his first visit to the palace. He said he had “learned so much from seeing the example she set for all of us who had the privilege to serve.”

“Your life has been a gift, not just to the United Kingdom but to the world,” Obama said in a video message, adding: “May the light of your crown continue to reign supreme.”

The name of the long weekend’s first event, Trooping the Color, refers to a regimental flag, or “color,” that is trooped through the ranks. Britain’s annual tradition for the queen’s birthday is a ceremonial reenactment of the way battle flags were once shown to soldiers to make sure they would recognize a crucial rallying point if they became disoriented in combat. 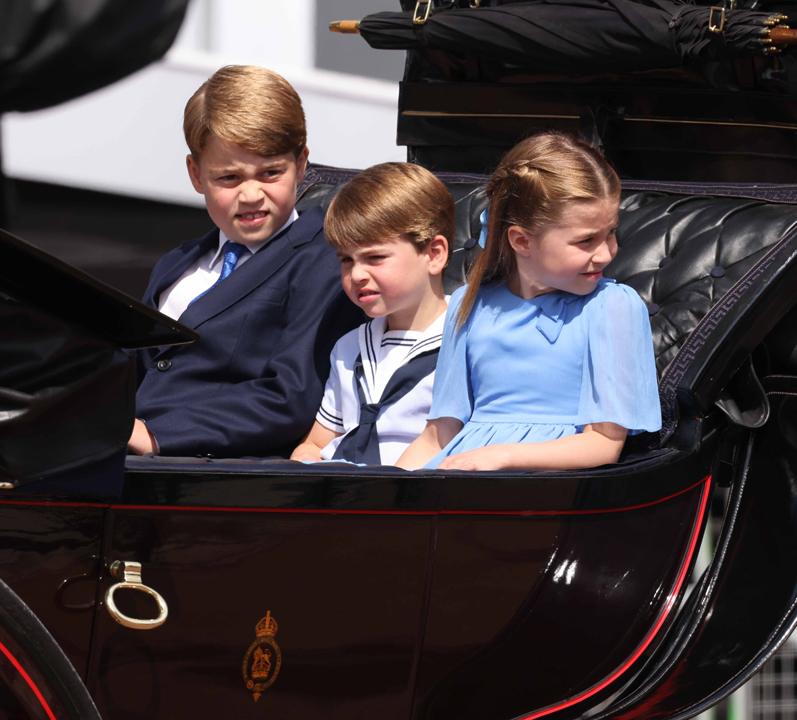 Prince George, Prince Louis and Princess Charlotte in the carriage procession during the Trooping the Color parade at Horse Guards, London, Thursday, June 2022.

The troops taking part come from the army’s Household Division, composed of the seven regiments that perform ceremonial duties for the queen. Their members are fully trained soldiers and often deployed overseas when not on ceremonial duty.

Each year a different unit has the honor of trooping its color. The 1st Battalion of the Irish Guards will have the spotlight during the Platinum Jubilee.

Thousands of people, some of whom camped overnight, lined the parade route — many of them sporting Union Jack flags, party hats or plastic tiaras.

Carly Martin, who caught a late-night bus from south London with her daughter, said she had come “to make memories.”

“You’re never going to see this again in your lifetime,” she said. “At least not in mine, maybe not in my daughter’s. … Seventy years — it is all I have ever known.”

Several protesters were arrested after getting past barriers and onto the parade route. The group Animal Rebellion claimed responsibility, saying the protesters were “demanding that royal land is reclaimed.”

Cheers and the clop of hooves rang out as horse-drawn carriages carried members of the royal family, including Prince William’s wife, Kate, and their children Prince George, Princess Charlotte and Prince Louis, from Buckingham Palace to Horse Guards Parade, a ceremonial parade ground about 1 kilometer (0.6 miles) away. 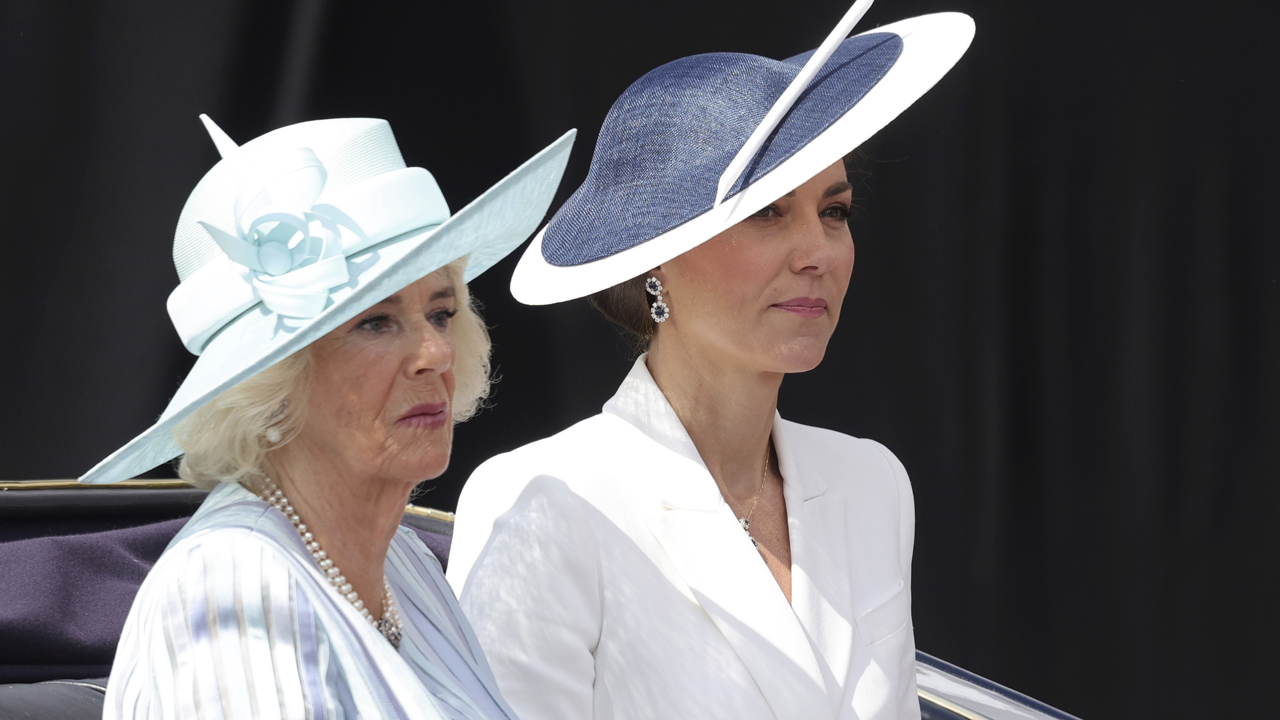 Camilla, Duchess of Cornwall, left, and Kate, Duchess of Cambridge ride in a carriage as they make their way to the Trooping the Color, in London, Thursday June 2, 2022.

The queen is expected to appear twice on the balcony of Buckingham Palace, but Prince Charles played a key role during the event. Mounted on horseback, he also took a salute, from ranks of scarlet-clad Guards, on his mother’s behalf, along with his sister, Princess Anne, and his son Prince William.

Elizabeth has had trouble getting around of late, and her courtiers have been careful to keep make things as simple for her as possible.

Senior royals including Prince Charles’ wife, Camilla, traveled in carriages to watch the ceremony from a building overlooking the parade ground.

The Duke and Duchess of Sussex join other royals to watch the spectacle. Harry and Meghan have traveled from their home in California to take part in the celebrations.