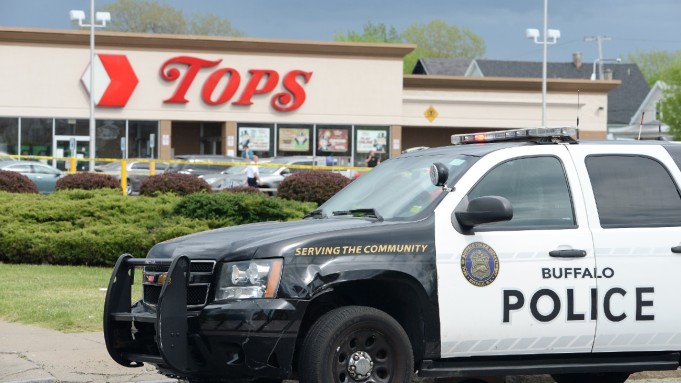 A white 18-year-old wearing military gear and livestreaming with a helmet camera opened fire with a rifle at a supermarket in Buffalo, killing 10 people and wounding three others Saturday in what authorities described as “racially motivated violent extremism.”

The gunman wore body armor and military-style clothing during the attack on mostly Black shoppers and workers at Tops Friendly Markets at around 2:30 p.m. Saturday. For at least two minutes, he broadcast the shooting live on the streaming platform Twitch before the service ended his transmission.

Police said he shot 11 Black victims and two who were white before surrendering to police.

“It is my sincere hope that this individual, this white supremacist who just perpetrated a hate crime on an innocent community, will spend the rest of his days behind bars. And heaven help him in the next world as well,” said Gov. Kathy Hochul, speaking near the scene of the attack.

The suspected gunman was identified as Payton S. Gendron, of Conklin, New York, about 200 miles (320 kilometers) southeast of Buffalo.

It wasn’t immediately clear why Gendron traveled to Buffalo. A clip apparently from his Twitch feed, posted on social media, showed him arriving at the supermarket in his car.

According to Erie County District Attorney John Flynn and the district attorney’s office, the suspect was arraigned on a first-degree murder charge Saturday evening in Buffalo City Court and was remanded without bail. Flynn says the sentence carries a sentence of life without the possibility of parole. A felony hearing is scheduled to take place on Thursday, May 19 at 9:30 a.m. Flynn says authorities are investigating terrorism charges and additional murder charges.

The gunman shot four people outside the store, three fatally, said Buffalo Police Commissioner Joseph Gramaglia. Inside the store, a security guard, who was a retired Buffalo police officer, fired multiple shots, but a bullet that hit the gunman’s bulletproof vest had no effect, Gramaglia added. The gunman then killed the guard, who was identified as Aaron Salter, according to sources. The commissioner said the suspect then stalked through the store shooting other victims.

“This is the worst nightmare that any community can face, and we are hurting and we are seething right now,” Buffalo Mayor Byron Brown said at the news conference. “The depth of pain that families are feeling and that all of us are feeling right now cannot even be explained.”

Police entered the store and confronted the gunman in the vestibule.

“At that point the suspect put the gun to his own neck,” Gramaglia said. Two officers talked him into dropping the gun, the commissioner said.

“What started out as a beautiful day in the city of Buffalo has turned into a terrible day, and one of tremendous heartbreak for every member of our community,” Brown said. “We have suffered a mass shooting with multiple casualties and several people injured. This is the worst nightmare that any community can face.”

“This was pure evil. It was straight up racially motivated hate crime from somebody outside of our community, outside of the City of Good neighbors … coming into our community and trying to inflict that evil upon us,” Garcia said.

“This is a tragic day in the City of Buffalo,” Flynn said in a statement. “This defendant is accused of traveling to our area and targeting innocent people who were shopping for their groceries on a Saturday afternoon. I continue to pray for all affected by this horrific crime. I am committed to obtaining justice for the victims, their families and this community. My office is working closely with the U.S. Attorney’s Office and our partners in law enforcement into potential terrorism and hate crimes. This is an active investigation and additional charges may be filed.”

Flynn’s office says the case is being prosecuted by Chief Gary W. Hackbush of the Homicide Unit and Chief John P. Feroleto of the Major Crimes Unit. The DA thanked the Buffalo Police Department, Erie County Sheriff’s Office, New York State Police, FBI, ATF and all other law enforcement agencies that are assisting in the investigation.

Elsewhere, NAACP President Derrick Johnson issued a statement in which he called the shooting “absolutely devastating.”

“Our hearts are with the community and all who have been impacted by this terrible tragedy. Hate and racism have no place in America. We are shattered, extremely angered and praying for the victims’ families and loved ones,” he added.

Separately, the Rev. Al Sharpton called on the White House to convene a meeting with Black, Jewish and Asian “to underscore the Federal government (is) escalating its efforts against hate crimes.” In a tweet, Sharpton said that “leaders of all these communities should stand together on this!”

“Today our hearts are broken and we grieve for the victims of the horrific act of gun violence in Buffalo and for their families and friends.  The Second Gentleman and I are praying for all those who knew and lost love ones. Law enforcement is proceeding with its investigation, but what is clear is that we are seeing an epidemic of hate across our country that has been evidenced by acts of violence and intolerance.  We must call it out and condemn it. Racially-motivated hate crimes or acts of violent extremism are harms against all of us, and we must do everything we can to ensure that our communities are safe from such acts.”

Braedyn Kephart and Shane Hill, both 20, pulled into the parking lot just as the shooter was exiting. They described him as a white male in his late teens or early twenties sporting full camo, a black helmet and what appeared to be a rifle.

“He was standing there with the gun to his chin. We were like what the heck is going on? Why does this kid have a gun to his face?” Kephart said. He dropped to his knees. “He ripped off his helmet, dropped his gun, and was tackled by the police.”

More than two hours of the shooting, Erica Pugh-Mathews was waiting outside the store, behind the police tape.

“We would like to know the status of my aunt, my mother’s sister. She was in there with her fiance, they separated and went to different aisles,” she said. “A bullet barely missed him. He was able to hide in a freezer but he was not able to get to my aunt and does not know where she is. We just would like word either way if she’s OK.”

Officials say federal, state and local entities are investigating the incident as a hate crime and racially motivated violent extremism, which falls under domestic terrorism.

“We are devastated to hear about the shooting that took place this afternoon in Buffalo, New York. Our hearts go out to the community impacted by this tragedy. Twitch has a zero-tolerance policy against violence of any kind and works swiftly to respond to all incidents. The user has been indefinitely suspended from our service, and we are taking all appropriate action, including monitoring for any accounts rebroadcasting this content.”

An later statement from a Twitch spokesperson said that an investigation confirmed that the stream was removed less than two minutes after the violence started.

According to SUNY Broome, the suspect was enrolled at the school full time for the fall 2021 and spring 2022 semesters. He has not been enrolled since March 22, 2022, the school said.

On Sunday, the school issued the following statement:

“SUNY Broome is sadly aware of the tragic mass shooting that occurred in Buffalo today and we offer our deepest sympathy and most heartfelt condolences to the victims’ families during this difficult time.

SUNY Broome has been informed that the suspect involved may be a student at the college. The individual in question is not currently enrolled at SUNY Broome.

Going forward, SUNY Broome will rely on the investigating agencies to release any additional information, as appropriate. Again, we offer our deepest condolences to the victims’ families for this terrible tragedy.”

Tops Friendly Markets released a statement saying, “The Tops family is heartbroken over the senseless violence that impacted our associates and customers at our store on Jefferson Avenue. We are working quickly to make sure that all of our associates have access to counseling and support that they may need. Tops has been committed to this community and to the city of Buffalo for decades and this tragedy will not change that commitment. We are working to find alternatives for our customers in this community while the store is closed and will provide updates in the near future.”

“Today 10 people were killed in New York by a white supremacist,” Attorney General Letitia James said on Twitter. “I mourn their losses. I resist the hate that took their lives because of the color of their skin. I pray for the day when being Black is not a reason to take our lives.”

At the White House, Press Secretary Karine Jean-Pierre said President Joe Biden is receiving regular updates on the shooting and its aftermath.

“The president has been briefed by his Homeland Security advisor on the horrific shooting in Buffalo, N.Y., this afternoon. He will continue to receive updates throughout the evening and tomorrow as further information develops,” she said, adding the president and first lady were praying for the victims and their loved ones.

“Buffalo is my home, the community I love. Today our neighbors, people who left their homes to simply go to work or get groceries, were targeted by a racism-inspired act of domestic terrorism. Families I know have been forever changed, loved ones forever gone. Known as the ‘City of Good Neighbors,’ Buffalo is community that looks out for one another. We are hurt, we are grieving, and we will need to come together like Buffalo does to heal. The facts are plain. The motivation is hate-filled and disgusting.  I applaud law enforcement and agencies at the federal, state, and local level who apprehended the shooter, are collecting evidence, and organized a quick arraignment. The shooter should be prosecuted to the fullest extent of the law.”

“Tonight, the country mourns the victims of a senseless, horrific shooting in Buffalo, New York. The FBI and ATF are working closely with the Buffalo Police Department and federal, state, and local law enforcement partners,” Attorney General Merrick Garland said in a statement. “The Justice Department is investigating this matter as a hate crime and an act of racially-motivated violent extremism. The Justice Department is committed to conducting a thorough and expeditious investigation into this shooting and to seeking justice for these innocent victims.”

New York State Senator Tim Kennedy released a statement saying the son of a member of his staff was among those shot. The shooting came little more than a year after a March 2021 attack at a King Soopers grocery in Boulder, Colorado, that killed 10 people. Investigators have not released any information about why they believe the man charged in that attack targeted the supermarket.