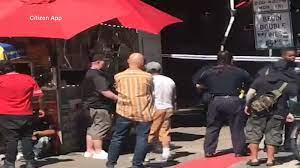 Two men were rushed to the hospital after a double shooting in Queens Saturday afternoon.

The shooting happened at 41st Avenue and 104th Street in Corona just after 3 p.m.

Police say a man was shot four times in the chest. He was taken to Elmhurst in critical condition.

Another man was grazed in the right arm and was taken to Elmhurst, where he is expected survive.

Police say a man in his 40s wearing a green shirt and blue jeans fled the scene eastbound on 104th Street.