Woman who flew in private jet to Washington D.C. for Trump rally arrested for role in Capitol riots 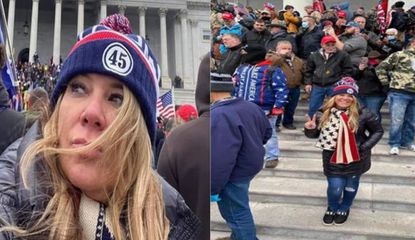 A Texas woman who flew in a private jet to Washington D.C. to join the pro-Trump riots, and then posted photos and videos of herself in the mob as it stormed the building, was arrested Friday, officials said.

Jennifer Leigh Ryan was tagged in photos on Facebook on Jan. 5 getting on a private jet at a small airport in Texas.

“We’re so excited! DC bound to #StopTheSteal,” wrote a man who tagged Ryan in the photo, referring to the popular Trump-supporter line that claims, without evidence, that President-elect Joe Biden stole the election, federal prosecutors said.

Ryan then posted many of her own videos onto social media from the private jet, the feds said.

The next day, she made her intentions abundantly clear in a video she posted on Facebook, according to prosecutors.

“We’re gonna go down and storm the capitol,” she said. “They’re down there right now and that’s why we came and so that’s what we are going to do. So wish me luck.”

She then posted more videos of herself and the crowd marching on the Capitol, along with a photo of herself posing with a peace sign in front of a group of unmasked people on the steps of the Capitol building.

She posted yet another photo of herself holding up a peace sign standing in front of shattered windows at the Capitol.

“Window at The capital [sic]. And if the news doesn’t stop lying about us we’re going to come after their studios next…” she wrote to go along with the peace sign and a big smile.

“We are going to f—ing go in here. Life or death, it doesn’t matter. Here we go,” she said in it, turning the camera toward her face, the feds said.

She then took a moment to tout her own work as a real estate agent.

The now-arrested Ryan, in a video posted just after the riots, said, “It was one of the best days of my life.”

She was charged with entering a restricted building without permission as well as disrupting the orderly function of government.