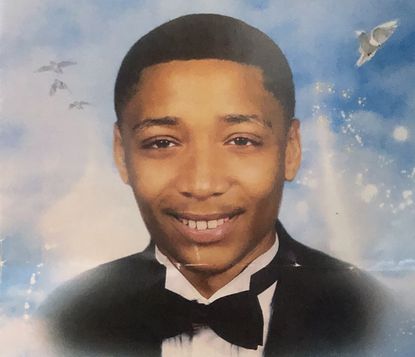 A woman suspected of fatally shooting a Brooklyn teen four months ago was arrested at Kennedy Airport as she was about to board a plane to Trinidad, police said Thursday.

Amari Harvey was waiting for her plane at terminal 4 at JFK Airport when members of the NYPD’s Regional Fugitive Task Force swooped in and took her into custody about 12:40 p.m. Wednesday.

Harvey, 21, was wanted for fatally shooting 18-year-old Sharif Richards in the chest during a clash inside an Infiniti G35 sedan parked at a Brooklyn corner on Sept. 29, cops said. It’s her first arrest in the city.

Richards was sitting in the driver’s seat of the luxury car near Foster Ave and E. 80th St. in Canarsie when he was shot. Medics rushed him to Brookdale University Hospital but he could not be saved.

The 2020 Erasmus High School graduate had been expected to begin an electrical engineering program in the fall, heartbroken family members said.

Richards loved football and played for youth leagues beginning at age 6 before taking the field at Erasmus.

The overflow crowd that filled Richards’ funeral in October included the teen’s teachers and football coaches, said his mother, who remained baffled by her son’s murder.

“This is a complete shock,” she said following the service. “Even all his friends, they said there is nobody they know that hated him. He’s just not the type. He’s quiet. He likes to make you laugh. He didn’t like to talk bad about people. It’s senseless. Nobody can understand why.”

Video surveillance recovered by detectives, eyewitness accounts and cellphone records put Harvey at the scene of the killing but a motive for the killing was not immediately disclosed, cops said.

Harvey is charged her with murder and weapon possession. Her arraignment was pending Thursday in Brooklyn Criminal Court. She lives in East New York, according to cops.