Woman stabbed to death inside Manhattan apartment, blood-soaked suspect barricades himself inside 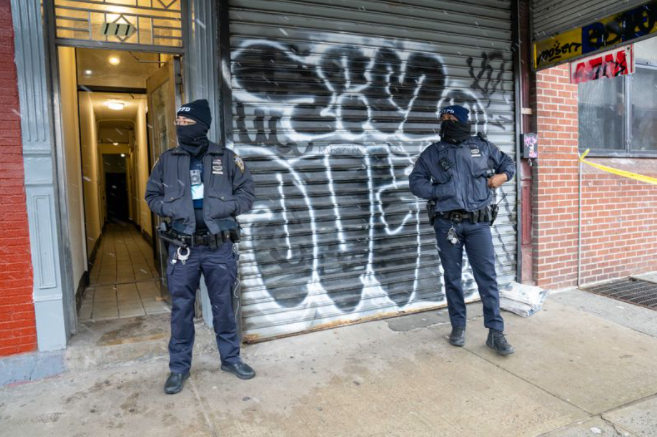 A woman was stabbed to death by a homeless man who followed her into her Lower East Side apartment building early Sunday — and then barricaded himself inside her home, cops said.

Neighbors called cops to the sixth-floor home in the building on Chrystie St. near Grand St. about 4:20 a.m. after hearing a woman’s cries for help. Police found the door barricaded shut but heard Christina Yuna Lee, 35, screaming inside.

“It appears that she put up quite a fight,” a high-ranking police source said.

After cops surrounded the building, the killer — covered in blood — briefly tried to flee via the fire escape then went back inside, police said.

Members of the NYPD’s Emergency Service Unit gained access to the apartment after about an hour and 15 minutes and took the suspect, identified by sources as 25-year-old Assamad Nash, into custody.

Her landlord, Brian Chin, said she moved to the building from New Jersey about a year ago.

Nash was taken to Bellevue Hospital for evaluation with charges against him pending. He is homeless, cops said.

Cops believe they may have been strangers to each other, the sources said.

Nash has eight prior arrests, three of them still pending in Manhattan court, mostly for low-level offenses in the subway system, police sources said.

He was freed without bail in three of those cases including a Sept. 28 assault case where he punched a man at a subway turnstile and a Jan. 6 arrest on charges of criminal mischief and escaping police custody.Nash was due back in court on all three outstanding offenses on March 3.

Chin said Nash should have been in jail and not on the streets to begin with and blamed criminal justice reform-minded politicians.

“This never should have happened,” he said. “This guy should never have been here, with the rap sheet he has. He should’ve been behind bars. He shouldn’t have been on the street, and then this never would’ve happened.”

Chin called out Manhattan District Attorney Alvin Bragg, who has faced harsh criticism for his soft-on-crime approach and rocky first month in office.

“From a landlord’s perspective, from storeowner’s perspective, we’re terrified of this, his policies and what not. Armed robbery of a store is now a petty larceny? What insanity is this? This guy, his rap sheet is a mile long, he should have been behind bars. Assault? Menacing? How is he out? This is outrageous.”

Yuna Lee was remembered in her apartment building as a friendly woman who always greeted her neighbors.

“The girl is nice. She says ‘hi’ in the hallway,” said neighbor Chi Chun. “The girl is a good girl. I remember her face — she was beautiful, young.”

Another woman who lives in the usually quiet building said the neighborhood is in dire need of more proactive policing.

“We need things to be prevented, not just confronted when they happen,” said Destiny, who asked to be identified by only her first name. “Things like this don’t happen in the building, but they do happen in this area. So it’s almost not surprising.”

“It is terrifying,” Destiny said. “You just don’t know what anybody is capable of.”ENU

The building sits across the street from Sara D. Roosevelt Park, which for decades has been a magnet for crime, drug users and homeless people. Local media highlighted conditions in the park last year after a food delivery worker was stabbed to death just outside the park on Hester St. near Chrystie St. on Oct. 16.

K Webster, the president of the Sara Roosevelt Park Community Coalition, said she recognized Nash from the area.

“It’s just awful. I’ve actually seen that guy in the neighborhood. This is really pitting people against one another,” she said. “And it really is, in my opinion, cruel to allow somebody who’s been that damaged to continue to do damage, both for the victim and for the person, for him.”

In light of the slaying, politicians across the city sounded off on the need for more effective mental health resources for at-risk individuals.

“Once again, the Asian-American community has been devastated by an act of senseless violence,” New York Democratic Sen. Kirsten Gillibrand said in a statement. “Decisive action is needed to prevent these attacks —all levels of government must work together to deliver resources to reduce homelessness, bolster mental health services and protect vulnerable New Yorkers.”

In a tweet, Mayor Adams described the incident as “the definition of horrific.”

“The suspect is in custody, but the conditions that created him remain,” Adams wrote. “The mission of this administration is clear: We won’t let this violence go unchecked.”

Although the NYPD does not believe the murder was a hate crime, state Sen. John Liu asked the city to provide relief to a fear-stricken Asian-American community.

The Asian American Federation — a nonprofit advocating for justice and opportunity for Asian immigrants across the city — said they are working with police and local officials.

“Once more we are faced with a terrible tragedy,” the nonprofit said in a tweet. “We are talking to the NYPD & the City’s elected officials as we deal with the crisis. There is an ongoing investigation, & we urge our community to remain calm & reserve judgment until we get all the facts.”