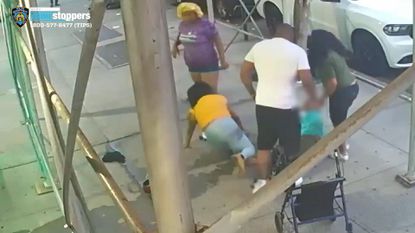 A violent quartet of criminals used fists, feet and a metal pot to pummel a disabled woman — then robbed her of her cash and her walker in a wild caught-on-video Harlem street attack.

The 61-year-old victim told reporters Thursday she doesn’t know why the three women and a man set upon her shortly after 8 p.m. Tuesday, not far from her home, near Eighth Ave. and W. 151st St.

She mostly keeps to herself, she said, and the only interaction she had with one of her attackers took place a day earlier, when she complimented one of the women on her clothes.

“I’d seen the woman in the yellow the day before. She was wearing a suit and I told her she looked nice. I don’t believe this.” said the victim, a former file clerk who spoke on condition of anonymity.

The victim said she was attacked as she stepped outside to get some fresh air after she’d returned from a hospital visit.

As she stood beneath a sidewalk shed, a woman in a yellow shirt yelled into her face while another woman in a purple tie-dyed shirt stood nearby, surveillance video shows.

“We were talking, and she just pushed me,” the victim said.

“She punched me in the face. They pulled my wig off and everything. They hit me in the back of the head and I started bleeding,” the victim said.

The woman in yellow grabbed the victim by the throat, pushed her into metal bars nearby, threw her to the pavement and pummeled her, the video shows.

The woman in purple bashed the victim in the head seven times with a metal pot — and then used the pot to smacking her in the rear end.

“That other woman with the pot — I don’t know where it came from,” the victim said.

As the attack continued, a woman in an olive-green shirt, kicked the victim several times.

The victim continued to struggle, pummeled from all directions by the three women and a man in a white shirt. They dragged her on the sidewalk and beat her some more.

A young man in a white T-shirt and red shorts leaned against the scaffolding and coolly observed the fracas, doing nothing to intervene, the video shows. The victim said he waited around for medics to show up.

“As they put me in the ambulance, he said, ‘You better watch out. You hit my mother. We’re going to get you,’” the victim said of the young man.

The four attackers made off with the victim’s bag, which contained cash and credit cards, police said. They also swiped her walker, which she has been using since she fell in her apartment about a year ago and suffered a slipped disc and broken ankle.

She couldn’t recall details of the conversation that started the incident. “I still have headaches. When I get up, the room starts spinning around,” the victim said.

The attackers have not been caught.

“If I see them, I’m gonna just walk past them. Why start anything, it doesn’t make sense?” she said. “But it won’t stop me from dialing 911.”