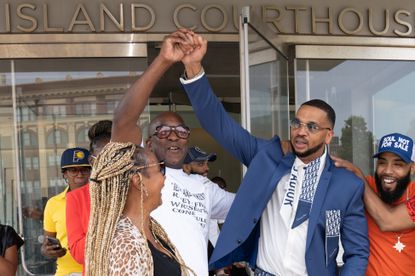 Grant Williams spent 23 years behind bars, insisting on his innocence to every inmate within earshot.

His voice was finally heard Thursday in a Staten Island courtroom, where an apologetic judge told a teary Williams that his wrongful murder conviction from the last century was at last overturned.

“I used to tell everyone in prison, ‘I’m innocent,’” Williams said outside court after his long-delayed justice finally arrived. “They’d say, ‘Aw Williams, everybody says that.’ I’d say, ‘I’m telling you the truth. One day you’re gonna see me on the news, and you’re gonna see that I was innocent.’

“And today is that day. So I just want to say to everyone, you never know how much strength you have until it’s tested.”

Williams hugged his son Antoine Morton, 30, who was just a toddler when his dad was imprisoned, as the exonerated man’s mother wept amid a family celebration.

“It was an overwhelming feeling for a mother, of joy,” said Cynthia Franklin, 58. “I just flooded with tears. I went back to 1997 when this happened, and they took my son from me. Now, I’m so happy. … It’s just a feeling that you’re alive again.”

The ruling from Judge Wayne Ozzi came two years after Williams was paroled on his 1997 conviction for fatally shooting Shdell Lewis one year earlier on Staten Island. Williams, now 50, listened as the judge delivered the words that he always believed would come.

“Mr. Williams, there’s nothing I or anyone in this courtroom can say that can give back all those years that you were incarcerated,” said Ozzi. “It was a grave injustice to you. It’s a shame that it took so long … All I can do is wish you well in whatever you do from this day forward.”

Williams once worked in the recording studio of legendary Staten Island rappers Wu-Tang Clan, and was joined in celebrating by his friend Ghostface Killah of the hip-hop crew.

“I’m glad it’s over now. It was like a ton of bricks just being lifted,” said Killah, born Dennis Coles, 41. “Everybody’s joyful. I missed him, he’s been gone that long. He left, a part of me left. It was like never really the same again.

“It was hurtful. I’m just glad that I’m still alive and he’s still alive to make it back to see each other again and reconnect and just move on.”

A “Wu Tang” baseball cap that fell from the head of the shooter was a key piece of evidence against Williams. But there were indications of his innocence early on: The initial description of the gunman was a 5-foot-5-inch man with a dark complexion. Williams is 6-feet-2 with light skin.

The first successful wrongful conviction case brought on Staten Island came after a range of new witnesses offered evidence proving Williams could not have been the shooter.

The prosecution hinged on just a single eyewitness and no forensic evidence. The jury initially was deadlocked before later returning its guilty verdict.

“And the lessons we learned sadly on the back and shoulders of this young man will be things that we follow every day in our office, to make sure that the injustice that had befallen Grant Williams will not befall another Staten Islander,” McMahon said.

Among the new information uncovered by the DA’s Conviction Integrity Review Unit was a finding that the ID procedures used by the police at the time were outdated.

Lewis was shot several times in the back and chest outside the Stapleton Houses on April 5, 1996. A teen witness said the shooter was nicknamed “Boo-Boo,” which cops determined was Williams’ nickname before his arrest.

In 2000, Williams he filed a motion demanding the baseball cap be tested for DNA evidence — but the hat had already been destroyed by the NYPD property clerk’s office.