What to know for New York’s election day 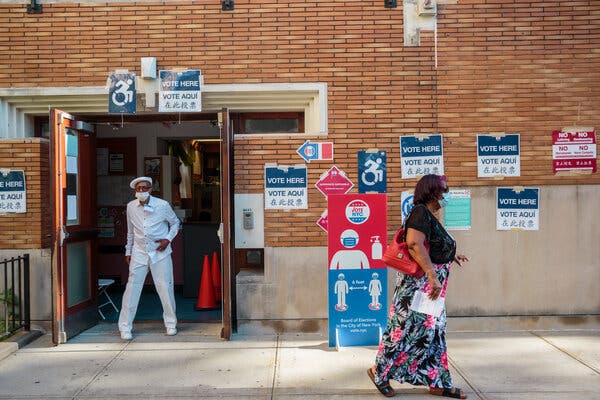 New York City’s primary is underway. The key race is the mayoral primary, which is also a major test of ranked choice voting. The system lets voters rank several candidates in order of preference instead of choosing just one.

Two years after city voters approved a measure to use the ranked choice system for primaries and special elections, Democrats will be asked to rank their top five out of 13 mayoral candidates on Tuesday’s ballot.

More than 191,000 New Yorkers cast their ballot during early voting which wrapped up Sunday at 4 p.m.

WHEN IS PRIMARY DAY IN NYC?

When will we know who wins NYC’s mayoral primary?
New York City has instituted ranked choice voting for Tuesday’s primary vote to determine the candidates in the race for mayor. But how long will it take for the results to be tabulated? It might take until July.

The two leading Republicans are Fernando Mateo and Curtis Sliwa.

Most recent polls have suggested that Brooklyn Borough President Eric Adams is the favorite, getting ranked first by a little less than a quarter of likely voters. Other top contenders include civil rights lawyer Maya Wiley, former city sanitation commissioner Kathryn Garcia and former presidential candidate Andrew Yang, who have been polling between 6 and 12 points behind.

It’s designed for those times you voted and thought: “I like more than one candidate on this ballot.” Or maybe you concluded: “I really like Candidate A but I don’t think he can win, so I’m going to vote for Candidate B because I think that person can beat Candidate C in the general election.”