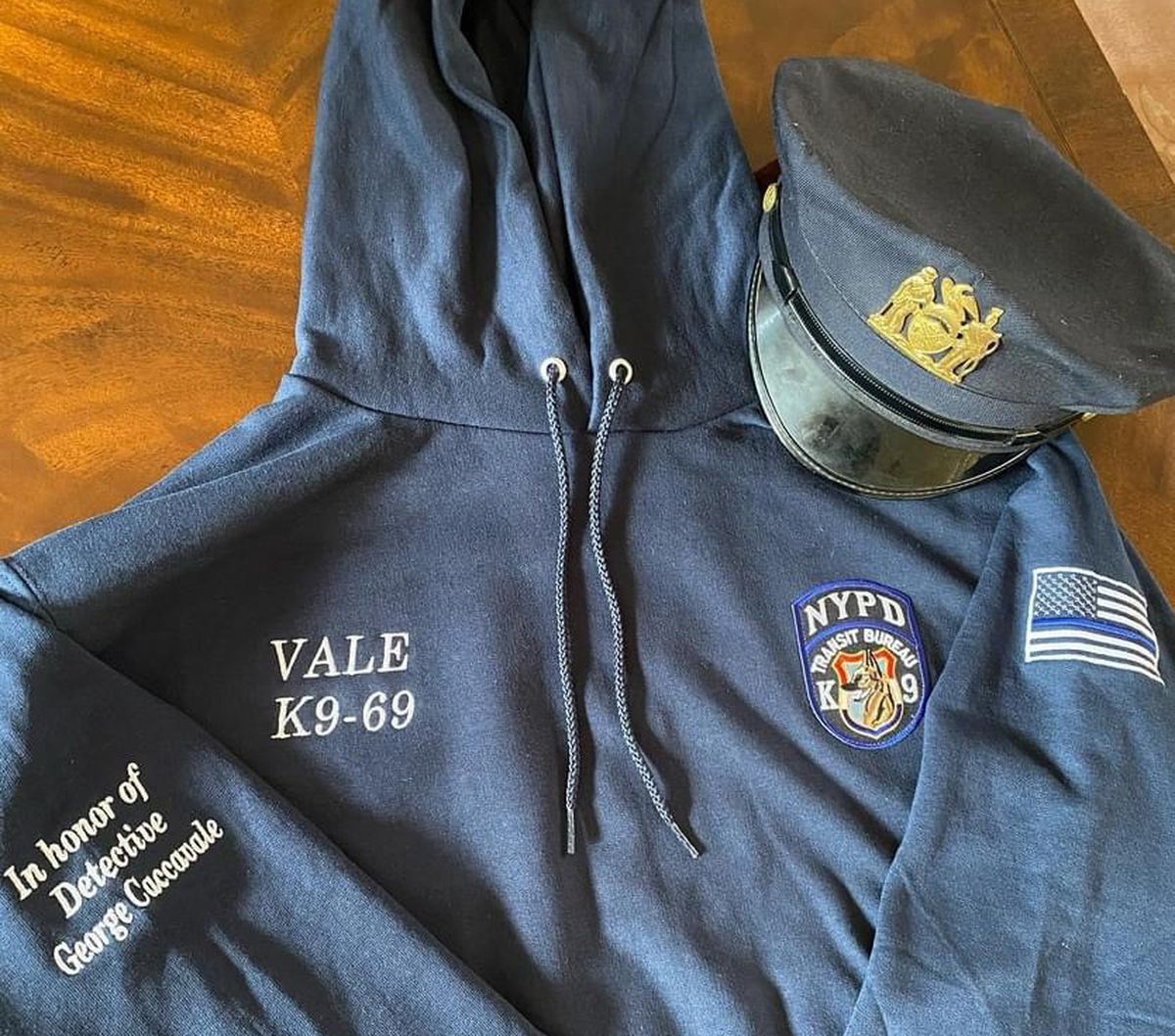 The thin blue line tripped up a daughter’s heartfelt memorial to her slain dad.

Carla Caccavale, 44, whose police officer father was fatally shot in 1976, blasted school officials in her Westchester town for banning a sweatshirt with a pro-police thin blue line patch to honor her dad and other cops — and remains unswayed by a school honcho’s subsequent flip-flop.

Caccavale, a newborn when Transit Police Detective George Caccavale was gunned down, says there’s nothing political about a tribute to a hero — and that her sweatshirt drive was never intended as pushback against shirts hailing the Black Lives Matter movement or memorializing those killed in confrontations with cops.

“I’m not into politics at all,” Caccavale argued. “This is not Black Lives Matter versus police. This was never the intent when we created the sweatshirt.”

The sweatshirt idea evolved after the NYPD last year named one of its K-9 dogs Vale, in honor of George Caccavale, who was killed by three men while working a second job at a Long Island City check cashing store.

Two of the three convicted killers in the case have died, said the NYPD detectives’ union. The third, Claude Holland, 80, is in prison upstate, records show.

Caccavale, 33, who lived in Pelham, left behind a wife and two children, including Carla, who was just 20 days old.

Ever since, Carla Caccavale has treasured every remembrance of her dad. And when she learned the police dog was named for him, she had sweatshirts made for her family and a few police officers.

They became an instant hit, with so many people asking about them that she said she ordered more and sold them to raise money for police charities.

The buyers included more than a half-dozen Pelham school officials, none of whom were offended or concerned by the patch, Caccavale insisted.

But late last month, superintendent Cheryl Champ blasted out an email to staff banning any staffer from wearing the sweatshirt — or any face masks — with the thin blue line patch. There was no such ban on shirts extolling the BLM movement or memorializing those who died in confrontations with police.

Champ elaborated in a follow-up email Nov. 3, suggesting what some consider a tribute to police is viewed as a threat by others.

“I recognize that in these heightened political times, these decisions, which were made on a case-by-case basis, have become intertwined and perceived by some to reflect a political leaning on behalf of myself and the district,” the superintendent wrote.

“Like many symbols whose meaning has been co-opted over time, the thin blue line flag has increasingly been perceived by students to be threatening in nature, causing them to feel unsafe within our schools.”

Paul DiGiacomo, president of the NYPD’s detectives union, was livid, firing off a letter to Champ earlier this week, calling the ban an “obscenity” and charging that she wasn’t protecting her students “by perverting their views about policing in American or turning your students into cop haters.”

On Thursday, Champ changed her tune.

In an another e-mail to staff members, she admitted “decisions made last week did not evenly support our ideals of political neutrality” and told them they should not wear any clothing that can be considered political speech, including support for candidates “and social movements such as those represented in our schools last week on T-shirts and masks.”

The ban doesn’t extend to students, she added.

On Friday, the district in a statement said the issue has never been about supporting cops. “This was specifically about disallowing staff attire displaying symbols considered to have political meaning, including, but not limited to the blue line flag,” the statement said.

Neither Carla Caccavale, who works in public relations, or DiGiacomo were impressed with the clawback.