Weekend mayhem continues, with seven murders across NYC in 24 hours 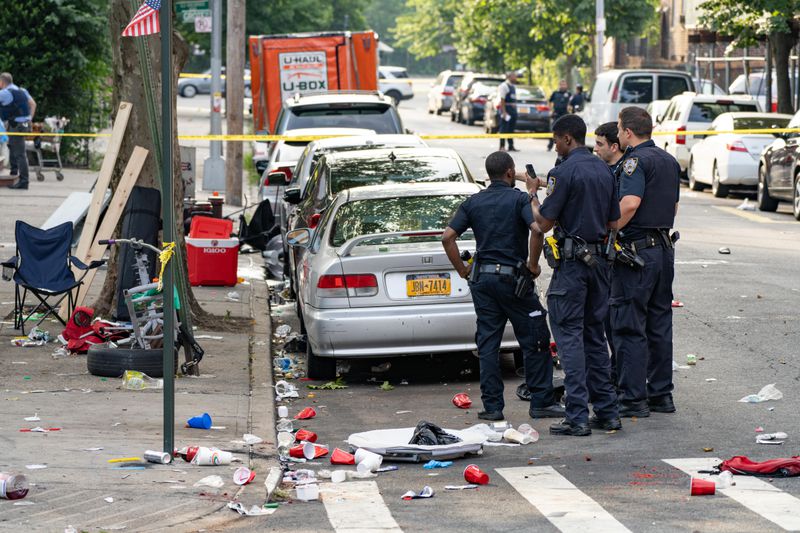 New York City was host to another bloody Sunday, with seven murders over the past 24 hours.

The killings come just a few weeks after the city saw one of its deadliest days in recent memory on July 5, when gunfire took the lives of nine New Yorkers.

The mayhem started on Staten Island just before 12:45 a.m., when a bullet tore through the right leg of Grashino Yancy, a 2012 Daily News Golden Gloves competitor, on Park Hill Ave. near Palma Drive in Clifton. The wound proved fatal.

Yancy, who had moved to Minnesota, returned to Staten Island for a few days to mourn the death of a family member, said his former coach, Pat Russo. The shooting apparently erupted at a barbecue outside the Park Hill Houses.

Less than an hour later, police found a transgender woman fatally stabbed in the chest in a third-floor hallway of the building on Jerome Ave. near W. 192nd St. at about 1:35 a.m.

Her name has not yet been released.

The violence in the Bronx continued at about 3:10 a.m., when James Connor, 37, was fatally shot in the head outside a building on Bronx Park East near Britton St. in Allerton.

A little more than two hours later, two more men were shot in the Bronx after a fight on Grote St. at Prospect Ave. in Belmont., police said.

Police chased down the alleged shooter, Joam Casado, 39, and charged him with murder and criminal possession of a weapon.

In Queens, a possible domestic violence-related murder became the fifth homicide of the day.

Shaka Ifill, 40, was shot in the back in a home on 91st Ave. at 84th St. in Woodhaven just before 2:15 p.m. Neighbors said he and his girlfriend had moved in together recently. Police had visited the home last week in response to a domestic violence report, police sources said.

Ifill was conscious at first, and told police that his girlfriend or her mother pulled the trigger, sources said. His condition worsened, though, and he died at Jamaica Hospital.

The bloodshed spread to Brooklyn before nightfall. At about 6:40 p.m., shots rang out on the sidewalk outside George Walker Jr. Park, on Vermont St. at Jamaica Ave. in Cypress Hills.

When the gun smoke settled, a 16-year-old boy was dead, shot in the head, and two more teenagers were wounded. One of them, an 18-year-old man, was also struck in the head and critically wounded, while the other, a 17-year-old boy, was hit in the leg and is in stable condition, cops said.

Finally, at 7 p.m., a 911 drew police to E. 16 St. near Cortelyou Rd. in Flatbush, cops said. There, they found a 32-year-old man sprawled outside an apartment building, shot in the chest and face.

Medics took him to Kings County Hospital, but he couldn’t be saved.

As of July 19, murders have increased by 24% across the city this year, with 212 slayings compared to 171 in the same time frame.

The city’s police unions deny cops are engaging in a work slowdown as a response to recent police reform laws and cries to severely cut police department budgets across the city in the wake of the death of George Floyd.

Instead, they blame Mayor de Blasio and the City Council for supporting law enforcement reforms they say lead to a rise in crime, including a city chokehold ban that criminalizes putting pressure on a defendant’s neck, back or chest.

NYPD Chief of Department Terence Monahan was caught on video last week claiming that all of the city’s district attorneys have agreed not to prosecute cops who accidentally break the new law.

Cops also blame NYPD Commissioner Dermot Shea’s decision in June to disband most of the plainclothes anti-crime units — for some of the crime rise, but the crime numbers were already increasing before he made that decision.