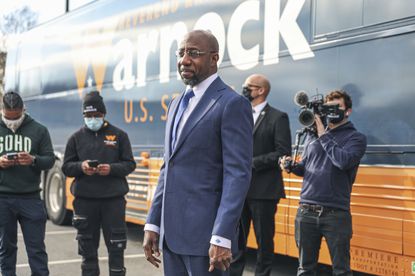 Democrat Raphael Warnock made history early Wednesday as he defeated one of Georgia’s two Republican senators in a hard-fought runoff election, putting Joe Biden’s party one step away from gaining full control of Congress for the first part of his presidency.

Warnock, a pastor who has for the past 15 years led the Atlanta church where the late Martin Luther King, Jr., preached, was declared the winner by The Associated Press as he trounced incumbent Sen. Kelly Loeffler by more than 35,000 ballots, or about 1% of the vote, with more than 97% of the results tabulated.

The 51-year-old preacher is the first African-American to be elected to represent Georgia in the Senate.

A second runoff election in Georgia, between Democratic challenger Jon Ossoff and Sen. David Perdue, remained too close to call early Wednesday, though Ossoff held a razor-thin lead over the Republican incumbent in early results. Ossoff had reason to be optimistic in that many of the ballots that were outstanding after midnight Tuesday were cast in areas in and around Atlanta and Savannah that typically trend overwhelmingly Democratic.

In a virtual victory speech before his race was called, Warnock said his election proved “anything is possible.”

“So Georgia, I am honored by the faith that you have shown in me, and I promise you this tonight: I am going to the Senate to work for all of Georgia,” he said. “Every day I’m in the United States Senate, I will fight for you.”

The stakes couldn’t have been higher in the all-hands-on-deck runoffs in the Peach State.

If Ossoff also pulls off an upset victory, Democrats will clinch a 50-50 partisan balance in the Senate. Such a breakdown translates into Democratic control of the chamber, as Vice President-elect Kamala Harris will have the power to break ties.

With the House already under Democratic control, a blue Senate would pave the way for Biden to achieve ambitious policy goals on anything from more economic coronavirus relief to health care, immigration and legislation on combating climate change. It would also mark the first time in over a decade that the House, Senate and White House would be under Democratic rule.

Georgia law required the runoffs to be held because none of the candidates claimed 50% when ballots were cast in the general election on Nov. 3.

Once a safe GOP stronghold, Georgia’s shifting demographics have transformed the state into a political battleground, and Biden inched out President Trump to narrowly win the state.

Tuesday’s unusual double-barreled runoffs were in many ways an extension of the chaotic presidential contest and a referendum on Trump’s waning presidency.

Perdue and Loeffler, ardent Trump allies who have backed his baseless fight to overturn his own election loss to Biden, needed to win either one of their races to keep the Senate under GOP control.

As results trickled in late Tuesday, Trump took to Twitter to repeat the same baseless allegations of voter fraud that he’s obsessed over for months.

“Looks like they are setting up a big ‘voter dump’ against the Republican candidates. Waiting to see how many votes they need?” he posted from the White House.

Biden would have a hard time making good on several policy promises if Republicans keep their Senate majority, with Majority Leader Mitch McConnell (R-Ky.) and his caucus likely looking to gum up the works for the soon-to-be president.

Beyond the Capitol Hill implications, the Georgia races have been dominated by explosive ideological battles on the campaign trail.

Loeffler, the Senate’s wealthiest member, spent the campaign accusing Warnock of being a “radical liberal,” saying it so many times at a debate with the Black pastor that jokes spawned on social media about her possibly being a robot.

Ossoff, who’d become the youngest member of the Senate at 33 if he beats Perdue, has stood up for Warnock, blasting Loeffler for appearing at a rally with a former Ku Klux Klan leader.

Ossoff has also sharply criticized Perdue for making lucrative stock trades related to the coronavirus pandemic while at the same time voting against more COVID relief for average Americans.

The pandemic, which has killed nearly 360,000 Americans, hung over Election Day in a particularly personal way for Perdue.

The 71-year-old GOP senator was stuck quarantining at home after coming into contact last week with a person infected with COVID-19. He has tested negative for the virus, but is isolating anyway in compliance with federal health guidelines, according to his campaign.

“Six years ago, I went to Washington to change things. And that’s exactly what we’ve done. Let’s do it for six more years, Georgia — for the sake of our children, and our children’s children,” Perdue tweeted from quarantine.

Georgia is one of six swing states that Trump has targeted as part of his desperate bid to subvert Biden’s election victory.

He has threatened GOP election officials in Georgia, including Secretary of State Brad Raffensperger, claiming without evidence that they allowed Democrats to rig the vote for Biden.

As with the Nov. 3 election, Georgia election officials said there were no major hiccups with voting on Tuesday.

Gabriel Sterling, a top Raffensperger deputy who has faced a barrage of personal attacks from Trump allies, took direct aim at the outgoing president as ballots were counted late into the night.

“It will fall squarely on the shoulders of President Trump,” Sterling, a self-described life-long Republican, said in an appearance on CNN of the possibility that both GOP senators would lose their seats. “When you tell people your vote doesn’t count, it’s been stolen and people start to believe that…All that stems from his decision making.”

The runoffs shattered turnout records even before voters headed to the polls Tuesday.

“This is history unfolding in Georgia right now,” Ossoff told reporters outside a polling site in Atlanta Tuesday afternoon.

A big spike in mail-in and early in-person voting carried Biden to victory over Trump in Georgia, making him the first Democratic presidential candidate to claim the state since 1992. Trump continues to falsely insist that voter fraud facilitated the early voting bump that boosted Biden.

Trump and Biden jetted to Georgia on Monday to fire up supporters at dueling rallies, with both men stressing the importance of turnout.

However, Trump may have confused voters as he spent most of his nearly two-hour rally pushing baseless claims about Georgia officials rigging the Nov. 3 election for Biden.