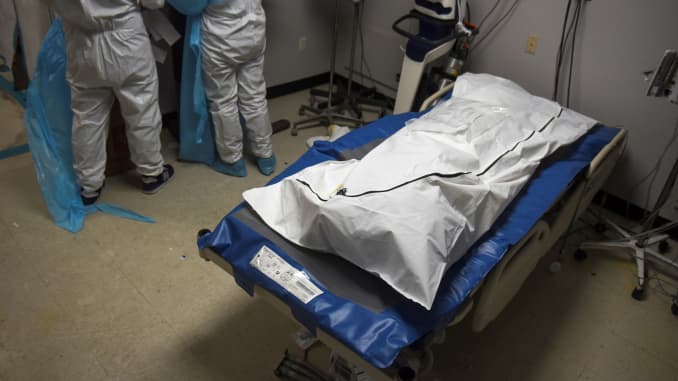 Hours after a New York City nurse became the first person in the U.S. to receive a COVID-19 vaccine in the U.S., the country’s rapidly growing coronavirus death toll surged past 300,000.

The horrifying tally, confirmed by Johns Hopkins University, is comparable to the entire population of many American cities, including Pittsburgh, Orlando and Newark. It’s also higher than the number of American military deaths in every conflict since the Korean War.

The pandemic continues to shatter daily records in the U.S., with the average number of new fatalities confirmed each day topping 2,000 in recent weeks, more than any other point since the virus began spreading across the country.

But nearly a year after the virus was first detected in the U.S., Americans are finally seeing a light at the end of the tunnel. The first doses of Pfizer’s promising vaccine have already arrived at medical facilities across the country, including in New York, where an ICU nurse became the first person in the U.S. to receive a clinically approved shot Monday morning.

The nurse, Sandra Lindsay, received her first dose of the treatment during a live-streamed video conference with Gov. Cuomo at Long Island Jewish Medical Center in Queens. Cuomo described the highly anticipated vaccine as “the weapon that will end the war.”

Gen. Gustave Perna, one of the military leaders overseeing the distribution of hundreds of millions of COVID-19 shots, compared Saturday’s shipment of Pfizer’s vaccine to “D-Day.”

“D-Day, in military, designates ‘the day the mission begins,’” he told reporters over the weekend. “D-Day was the beginning of the end and that’s where we are today.”

The first doses of Pfizer’s experimental vaccine — which was developed in record time with German biotechnology company BioNTech — were expected to arrive at about 150 designated medical centers Monday. It marks a historic effort to inoculate millions of Americans, starting with health care workers and nursing home residents.

The U.S. Food and Drug Administration authorized emergency use of the vaccine on Friday night, a day after a panel of independent experts reviewed data from Pfizer’s clinical trial and recommended approval. Dr. Robert Redfield, director of the Centers for Disease Control and Prevention, signed off on the recommendation Saturday night.

“As COVID-19 cases continue to surge throughout the U.S., CDC’s recommendation comes at a critical time,” Redfield said in a statement Sunday. “Initial COVID-19 vaccination is set to start as early as Monday, and this is the next step in our efforts to protect Americans, reduce the impact of the COVID-19 pandemic, and help restore some normalcy to our lives and our country.”