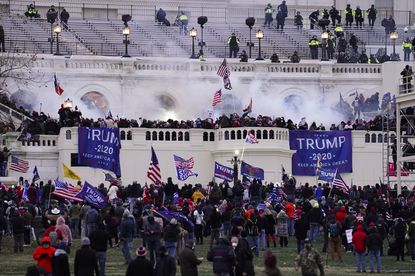 A scathing internal report serves up more evidence of Capitol Police lapses prior to the Jan. 6 U.S. Capitol siege — including that police ignored intelligence that a right-wing website posted a map of the Capitol complex’s underground tunnels, it was reported Tuesday.

The Capitol Police inspector general also reported the agency’s officers were equipped with expired ammunition and riot shields that were improperly stored, making them prone to breakage, CNN reported.

Sixteen days before the attack — on Dec. 21 — a map of the Capitol’s underground tunnels was posted on a pro-Donald Trump website, news reports say.

The Department of Homeland Security passed on information about “a blog referencing tunnels on U.S. Capitol grounds used by Members of Congress and research of the website identified four ‘threads/blog topics containing comments of concern,’” states the summary of the IG report obtained by CNN.

The map appears gone from its original location on the internet, and the site that hosted it has been taken down.

It’s well known the Capitol riot was planned and discussed weeks ahead of time. But the IG report focuses on the Capitol Police force’s failure to respond to warnings of what Jan. 6 would bring.

The IG’s report notes Capitol Police failures in equipment maintenance, lack of policies for the department’s Civil Disturbance Unit, and its handling of intelligence prior to the attack, the CNN report said.

Police brass also didn’t have an accurate roster of the department’s Civil Disturbance Unit, which was tasked with responding to the riot, the reports say.

The unit listed 187 officers — but two of them no longer worked for the Capitol Police on Jan. 6 — and in any event, the number listed was far lower than the 276 officers acting Capitol Police Chief Yogananda Pittman told Congress were active that day.

The unit’s riot shields were not stored at a proper temperature, rendering them ineffective, the CNN report says.

Additionally, the network says, “orders from leadership” prevented the Civil Disturbance Unit from deploying all of its less-lethal options during the riot, including a 40mm grenade launcher, a 37mm grenade launcher, and Sting Ball grenades, which spread non-lethal rubber balls when they explode.

In the end, the unit was “operating at a decreased level of readiness,” due to the numerous failures, the IG’s report states.

An earlier report by the Capitol Police inspector general cited other lapses by department leaders, including that they department “did not prepare a comprehensive, department-wide operation plan for demonstrations and lacked adequate guidance.”